The Partnership by Barry Unsworth 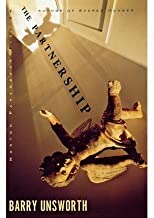 The Partnership was Barry Unsworth’s first novel and feels rather different in both style and content from most of his other books. It deals with a business arrangement, and therefore relationship of sorts between Foley and Moss. They design and manufacture plaster pixies for the tourist trade in a Cornish seaside village. There’s a division of labour between them and as the book progresses, divisions of other sorts emerge as well.

There’s a hint of Under Milk Wood about the setting, though there’s no attempt at poetry. What we do have, however, is a portrayal of a small community that is impinged upon by outsiders and their ideas. Not that all of the characters were born and bred Cornish. They weren’t, and so to some extent the book covers some similar ground to Julian Barnes’s England England. But it is both more and less than this.

The Partnership is about the psychology and the mechanics of the relationship between Moss and Foley. Quite different in personality as well as other highly significant traits, they cooperate to achieve a common goal. Perhaps like any relationship, their pragmatic business arrangement succeeds while its boundaries are defined and agreed. Its success is limited, however, and both yearn for something else. What they individually desire leads eventually to their becoming incompatible, however.

The Partnership is a must for someone like me who is a confirmed addict of Barry Unsworth’s work, but it is definitely not a place to start. Some of the issues the book deals with have dated, as have the ways in which they are treated. That said, I thoroughly enjoyed the book, once I had come to terms with its limitations.

View the book on amazon
The Partnership

Posted by philipspires at 1:00 PM