When We Were Orphans by Kazuo Ishiguro 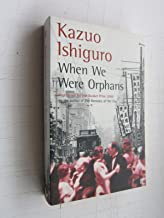 In When We Were Orphans Kazuo Ishiguro constructs the life of Christopher Banks via a series of episodes, ostensibly written by the character himself, between 1930 and 1958. We first meet Christopher as a young Cambridge graduate through his own recollections, recorded from a perspective of several years past. We discover how he was introduced to London’s elite society. It appears that he always hovers on the edge of this group, having neither the birthright nor the connections to penetrate its layers. He does have a pedigree, however. We find ourselves convinced of that from the start. He has already become a success in his chosen career.
It was a Japanese boyhood friend who bought him a magnifying glass when he announced his ambition to be a private investigator, a detective whose individual effort would unearth truths the combined wisdom and talent of armies of police had overlooked. Thankfully, for it could never have succeeded, Kazuo Ishiguro resists the temptation to offer any forensic evidence to support Christopher’s claim of talent in the area. The character’s skill, achievement and eventual fame are therefore taken as read. This, I emphasise, is a strength of the book, not a weakness.
Christopher’s background provides the crucial setting for the book’s plot. He was born in the international settlement of Shanghai, his father an employee of one of the grand colonial era corporations. It is an era when fortunes are still being made from the opium trade, a trade Christopher’s mother vehemently and publicly opposes. The unconventional uncle Philip is an influence on the young boy, as is a Japanese friend, Akira, with whom Christopher seems to spend many hours in limited, rather competitive relationship. When Christopher’s father disappears, decisions are made about the boy’s future.
One day Uncle Philip takes him out and leaves his in the care of strangers, orphaned. He is eventually well catered for, however, is brought up in England and goes to Cambridge. There have been worse fates. Many years later, Christopher Banks returns to a war-torn Shanghai to solve the mystery of his parents’ disappearance, which he does with unconvincing ease. But throughout, Christopher seems removed from, even above any reality that admits him.
He seems to find precisely and only what he wants to find. He demonstrates a separateness that seems so aloof it even allows him to cross lines of conflict whilst apparently remaining above them. On more than one occasion, Ishiguro suggests that this might be naiveté. An interesting point… When We Were Orphans describes a life that began in an expatriate enclave. Christopher is thus perhaps a cultural orphan as well. He uses his detachment to advantage, but even he cannot fully comprehend the nature of his separation from his parents. When he has discovered all the facts, he realises that he was never less than central in other’s plans, despite remaining ignorant of their motives.
Kazuo Ishiguro’s book is engaging, but ultimately disappointing in that it does not seem able to sustain the momentum or the logic of its own plot. It is beautifully written, but well before the end Christopher Banks seems to retreat into a world of his own, far away from his reader.
View this book on amazon When We Were Orphans