The Book Of Evidence by John Banville 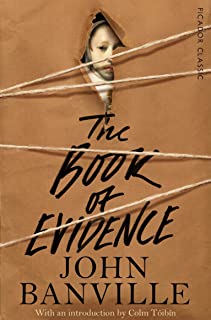 Freddie Montgomery, the central character of John Banville’s The Book Of Evidence, is an apparently complex man. The word ‘apparently’ is important because he has a tendency to cloak really quite simple actions in complex, sometimes convoluted narrative.
The Book Of Evidence has a strong plot, but one that is revealed only piecemeal in the form of what seem at first sight to be the random recollections of an imprisoned man. A potential reader would not want a listing of these details here, since the manner of their revelation is one of the most absorbing aspects of this beautifully crafted book.
As Freddie reveals his story, just a little at a time, we learn his motives and discover precisely what he has done to warrant his incarceration and trial. This jigsaw of history eventually fits together to reveal a series of events and relationships that were perhaps always confused. That’s life. Suffice it to say that there is a family history, an art collection, the theft of a painting and a murder, nothing less than the smashing of a woman’s head with a hammer. Piece that together with a gay bar, snippets of Ireland, police and prison and there is the basic framework of John Banville’s novel.
t is the author’s use of language, however, that creates most of this book’s effect. Though never aspiring to difficulty for its own sake, the style is often complex, often employs convoluted sentences that meander their way to places their openings seem unable even to conceive. Their colour and effect make The Book Of Evidence a delight to read from beginning to end. But some time before the end, their effect may also be likened to the surface of a busy canvas whose almost fanatical attention to detail eventually drags attention away from the overall design. For some, the style might begin to grate.
Thus, by the end of the book, I felt that the stylistic invention had begun to dominate, to confuse, even obfuscate. There were powerful points to make about the character of Freddie, but the parts that adhered – sometimes randomly – to his outline rather confused the impression he made. There again, that might just have been the point, since he also eventually managed to convey a peculiarly individual, a strangely distant and detached relationship with his own actions and motives. In the end, we know just as much about Freddie as he wanted us to know.
View this book on amazon The Book of Evidence

Posted by philipspires at 8:49 AM No comments:

The Line Of Beauty by Alan Hollinghurst 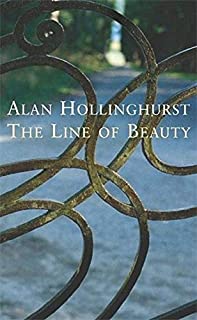 It can be no coincidence that Nick, the Oxford graduate who comes to stay, has the surname Guest. The Feddes invite him into their London home, Kensington Park Gardens, no less, because he has been a pal of their son, Toby, at university. Head of household, Gerald, is a Tory MP, elected by the good people of Barwick in Northamptonshire to represent their interests. It’s a county that always elects Tories, even when they close down the local steelworks, even when they candidates might appear unelectable.
Gerald, like everyone else in The Line Of Beauty, however, seems to be interested only in representing himself, a pursuit he achieves, again like everyone else, with partial competence. And then there’s Catherine, the Feddens’ unstable daughter who is on lithium, consistently referred to as librium within the family. Wani Ouradi, Antoine to officialdom, is the son of a Lord of Lebanese origin. The family owns a chain of supermarkets. Wani eventually has sufficient resources to buy up a piece of central London so that it can be redeveloped into premises to house a magazine venture destined from the start to sell no more than a copy or two. But then it will be something for Nick Guest to do with his spare time.
The characters in Nick Hollinghust’s book never really seem to be required to worry about the consequences of their actions. Leo is something different. He’s a council worker, and black, and not rich. An odd man out? He plays a significant role in the early part of the book, and later reappears when his family report he has dies of AIDS. The core of the book, it seems, is its sexuality. Nick Guest, along with several other characters, is gay. These people are not just homosexuals, however. They project an air of public display, men who wear their sexuality like a school tie. Perhaps they are not alone in that. So Nick has his fling with Leo. He has clearly flung with Toby and flings far and wide with Wani. The image of these rich young men having it off in smelly, locked lavs will live on after the book, but not for long. Nick regularly refers to Henry James, the quotations appearing like commentaries to the action.
Personally, the setting and characters reminded me more of Anthony Powell, who often inhabited similar social echelons. Powell’s characters can be every bit as devious, selfish, self-obsessed, fickle and ignorant as anyone in The Line Of Beauty. The difference, however, is that Powell’s upper crust speaks of misdemeanours in hushed tones. His is still an era of closets and his characters at least try to lock their skeletons therein. Alan Hollinghurst’s desirables, however, apparently want their skeletons in the shop window, mobile and, apparently, bent double before them.
And it’s not just the gay sex that’s traded, since cocaine and dope figure large as well, for the book inhabits the 1980s, the era when, we were told, wealth and riches flowed in the direction of merit, thus auto-confirming its sense of superiority and right. Eventually each of the intellectually muscled, self-seeking morons that populate The Line Of Beauty comes up against limitations. Some of these are personal, others beyond control. Scandal emerges and AIDS takes its toll of gay abandon. Nick’s guest status is questioned. He seems to take the blame for everyone else’s shortcomings. He seems to walk away saying, “Good while it lasted”, a motto that might have applied to the book, but it didn’t. The characters and their rarefied lives were eventually interesting, finally engaging.
Those things that Anthony Powell’s characters would have hidden are not only in the open but are flouted. And then, when comeuppance comes up, it seems that nothing will stick, nothing will damage any of them. And so this particular reader felt that their contribution to humanity might not reach the positive. Thus the story leaves a question. Is it voyeuristic, satirical, or merely horribly descriptive?
View this book on amazon The Line of Beauty 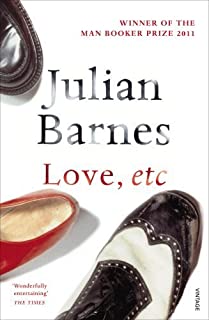 It’s hard to imagine a more perfect marriage of form and content than Love, etc, in which Julian Barnes continues the story of characters that came to life in Talking It Over. If, however, this marriage is fine, then equally the marriage of Gillian and Oliver is not. And neither, for that matter, was the previous one that temporarily joined Gillian and Stuart.
Julian Barnes tells the story of this love triangle entirely in the first person. Gillian, Oliver and Stuart appear like talking heads on a screen to relate their own side of things. Since we left them at the end of Talking It Over, Stuart has moved to the States, where he has become a successful businessman and has found a new partner. Oliver, meanwhile, having won the hand of fair Gillian, has started his family but has fallen on hard times, an experience he seems to regard merely as a passing phase, except that it’s clearly not a phase and neither does it pass.
Re-enter Stuart, and thus the situation progresses. Occasionally, especially when the principal actors mention them, minor characters appear to have their often substantial say. There is an ex, a new girlfriend, an occasional mother. Also, the children have their say, their naiveté as confused as it is innocent, their vagueness inherited, perhaps, from their personal environment.
And so a story unfolds. Oliver is as full of theatre and bravura as he was throughout Talking It Over, but now it rings more of a bluff, a screen erected for self-protection rather than an extrovert’s sheen. Unemployment and illness seem to have exhausted him. Stuart, having made his fortune, is on an up and begins to reassert his desire to occupy the position he has always coveted, the space by Gillian’s side.
There are surprises in store, surprises for the characters and for the reader. But what Julian Barnes communicates with such subtlety, skill and ease are the inconsistencies of human character, the incongruities of events, the contradictions and deceptions of behaviour, and the illusions these confusions create. These people all act primarily out of self-interest. But then who doesn’t? That’s the point. And thus the process takes all of us to places we have all been, but have often failed to notice or acknowledge, even if we have admitted and recognised our motives, which most of us have not.
Love, etc is a brilliant book, brilliantly conceived and brilliantly executed with a lightness of touch that leaves us wholly surprised when we encounter a fundamentally serious point. The plot? Who cares?
View this book on amazon Love, etc

Posted by philipspires at 9:42 PM No comments: