Leaves From His Life, essays by Leoš Janáček, edited by V and M Tausky 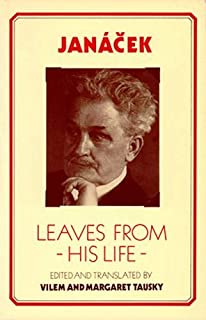 About twenty years ago my wife and I were on a train that came to a halt. It was late afternoon in mid-August. We were on holiday. A weak sun was already casting long shadows from the power-line gantries across the heavy industrial landscape in view. It was a local train with low priority at the signals. The carriage was nearly empty on this service form Kutná Hora to Prague. As we awaited the passing of an express, the only sounds came from steam hissing from vents in the pipe-work of nearby factories.
A young man on a seat opposite started to doze. His head nodded forward. His dark checked shirt opened wider at the neck to reveal white skin which, unlike his head and neck, had remained untouched by the sun while he had worked his day on a construction site. His boots and trousers had streaks of earth and cement that confirmed his trade. The express passed by, slowly, without much noise and then, just seconds later, our train lurched into slow motion. The young man woke up with a start. “Pfui,” he said as he rubbed his palms against his face.
And, for the next few minutes, all I could hear in my head was music replayed from memory. There is a moment in an opera, a Czech opera, where a character awakens from sleep. He not only says this word, but he sings it with exactly the same intonation and stress as my fellow traveller did that August afternoon on a stalled suburban train. I ought to have realised immediately that this was no coincidence.
In part I did, but I was not prepared for how perfectly the composer had set that strange little word. The music literally came to life. The opera in question is by Leoš Janáček. He spent much of his time listening to and notating the music of everyday sounds and speech. These he used to set the words of his own libretti, all of which are highly naturalistic rather than stereotypically operatic. He repeats very little. There are no set pieces. The people are never counts or kings, princesses or heroes. There is the occasional fox and frog, however, and many chickens. But for the most part, Janáček’s characters are like the slumbering builder on the train, ordinary people, working class, middle class, merchants or labourers, sometimes artists, sometimes prisoners.
On first hearing his music can sound disjointed, lacking the flowing lines that lyric opera fans might expect. But Janáček’s music is both cubist and yet still wholly naturalistic. People really do speak like that. Of course he stretches the points. It is opera, after all. But it is not only speech that is naturalistic in Janáček, as anyone who reads this beautiful little book, Leaves From His Life by Vilem and Margaret Tausky, will soon realise. Janáček notated the sound of the sea, birdsong, the trickling of water in streams, the wind, coughs and sneezes, and about anything else that took his fancy.
Above all he notated the sounds of speech, words married to their expression. In one respect, he was the complete impressionist, but in another the complete opposite because he then reassembled these snippets of collected reality to form something wholly original. Some of essays, reminiscences, musical analysis and occasional literary reflections that fill leaves From His Life were written for the composer’s own column in local newspaper in Brno.
I first read the book over twenty years ago, just before my holiday in then Czechoslovakia, during which I visited Brno to stand in Janáček’s study. Re-reading it now is something of a revelation. If anything it seems fresher now than then, but there again perhaps it’s me that’s mellowed with age in a way that Leoš Janáček never did. If I had another life I would learn Czech to gain a fuller appreciation of the man’s music. It must be worth it! As an example, just imagine the sound of the opening of the Credo from the Glagolitic Mass. In Czech, the word is vĕruju, I believe. Janáček’s setting is three notes with a long stress in the middle. Try saying ‘I believe’ or even worse, ‘credo’ to the same sound. It only works in Czech. Anyone who is the least bit interested in opera and certainly anyone who as listened to Leoš Janáček’s music will love Leaves From His Life.
The writing style alone is a wonderful insight into his music. The man really did think in those terse little aphorisms. But what shines through his music and his words is his love of and devotion to the experience of ordinary folk, and the occasional bird, furry creature or insect: life, in short. View the book on amazon Janacek: Leaves from His Life

Posted by philipspires at 6:33 PM 3 comments: