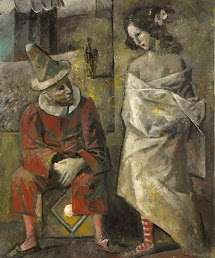 Zacarías González was an artist. He was also a teacher. He taught drawing. He was born in 1923 and died in 2003. He lived most of his life in Salamanca, the city of his birth. He spent some time in Madrid, some on national service in Navarra and, in later years, when the Castilian winter was felt more keenly, he headed south to Alicante. He was a lifelong teacher of drawing and painted in his spare time. He does not seem to have travelled extensively.

In the Calle Alcaron gallery, a visitor can see most of the artist’s life’s work, which divides itself across three broad periods, the representational, the abstract and the re-discovery of a changed realism. Zacarías González is largely unknown in international art circles, hardly known even in Spain and is a name that only aficionados in Salamanca would recognise. So why devote an article to him? The answer is simple. It’s the quality of the experience that deserves publicity and wider appreciation.

In his biographical note in the gallery’s excellent catalogue, Louis Javier Moreno observes that for many twentieth century artists, the life is the art. In the case of Zacarías González, however, he insists that this should be inverted so that for this artist, the art was his life. These are pictures that are intensely personal, enigmatic, intellectual, reflective, self-analytical, self-critical, refined, ascetic. They are also incredibly beautiful. At no point does this work try to shock, strive for noticeable individuality above communication, use overstatement to momentarily shock. Everything here simply communicates.

As an artist, Zacarías González seems to have visited several twentieth century styles in the same analytical way that an interested tourist might become familiar with a new place. He seems always to have been learning, but his powers of assimilation were considerable. He notices stylistic detail, contextualizes it within his own experience and then, rather than copy its dictates, he uses this assimilated language to communicate a personal world in visual form. 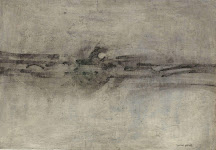 And so here, in three floors of this Casa-Museo set in a modest house, we are presented with recognisable associations of early Picasso, cubism, di Chirico-like surrealism, Tapies-like enigmatic abstraction, classical forms that might have been painted on the plaster of Pompei, Klee and Rouault and probably quite a lot more. But these are not copies. They are not imitations. They are personal works that inhabit a stylistic world and use the language of that world to share potential expression and thus, via that learned assimilated language, state something profoundly personal, and thus quite different from the still identifiable influence.

One of the joys of traveling in Spain is to share the oft-expressed pride in local heroes, be they artists, writers, musicians, architects, or whatever. From the famous, such as Dali in Figueres or Chillida in San Sebastian or Sorolla in Madrid (which, of course, was his residence, not his birthplace) to the less well-known internationally such as the Galician painters in Ourense and Pontevedra, those of the Almería school, or the Basque artists in Vittoria or Bilbao. Each town in each province seems to express a quiet, understated pride in local achievement and, crucially, devote resources to celebrate that achievement with always understated, but real pride. There may be queues of tourists in Figueres, but one often needs to seek out those galleries that display local work. One needs, for instance, to book an appointment to visit the Chillida. Also here in Salamanca, there’s an email link on the Casa-Museo website that allows a visit to be pre-arranged. One can’t just turn up to visit to the Casa-Museo Zacarías González. But do not be deterred. The appointment is easy to obtain, and the rewards are memorable.

The visitor to Salamanca will have the cathedrals, the University, the palaces and the stunningly beautiful old town on the list, not to mention the art nouveau gallery. But do not let the apparent obstacle of having to arrange a visit to this gallery deter you. Any visit to Salamanca by anyone with the slightest interest in art should include a trip to the Casa-Museo Zacarías González. You will not be disappointed.

Posted by philipspires at 10:42 AM No comments: