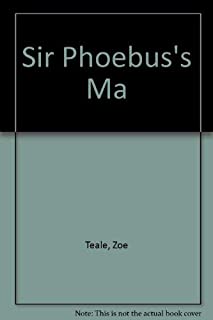 Zoë Teale’s Sir Phoebus’s Ma is more of a travelogue than a novel. It’s a series of impressionistic reflections, experienced during a year in Japan. The year was spent by a twenty-two-year-old English teacher in a regional northern town, where the students are not as motivated as the stereotypical oriental swot. Teaching methods are traditional, downright boring from the point of view of a recently-qualified practitioner, but they are as unquestionable as they are ingrained. Anna’s supervisor is a traditional Japanese male, at least that’s what Anna thinks. He is called Moriya sensei. There is a suggestion of eccentricity in his habit of translating tombstone inscriptions. There is also a hint of a willingness, nay desire to sample a foreign taste or two, especially when it comes in the shape of a young female teacher subordinate.
If only our central character, the teacher herself, who is the book’s first person narrator, could have willingly sampled a few of the local tastes for herself… Not that I thought an affair between herself and Mr Moriya was ever likely or desirable, perhaps from either party’s point of view. But without that tension, the book would have been quite plot-less, since the plot was never allowed to intrude on recalled experience. Anna and some other expatriates are keen to experience tradition and the indigenous. They can’t cope with the food, of course.
Anna herself travels to the other side of the world eager to seek out the authentic, but she refuses to leave her vegetarian preference at home. She compromises on eating fish, but when seriously asked an opinion on whether she would eat whale meat, she seems to have no position, which is strange, which ever way you view the character. In some ways Anna embodies the confusion of Western identity. She is keen to experience the authentic and professes respect, a romanticised, perhaps self-obsessed respect, of course, for its assumed value. But at the same time she is unable to participate in what she encounters and is thus rendered a permanent spectator by the pressure of her own neuroses. She emanates from a culture that is ignorant of itself, but afraid to be anything else. Anna’s Japanese hosts are tolerant. Imagine a Japanese visitor to a rural English town insisting on eating only Japanese rice. How far would she get?
But Sir Phoebus’s Ma is still worth reading. We are told snippets of legend, participate in the odd celebration or two and nose our way into a taste of Japanese domestic life. Anna’s trip to Kyoto, though brief, is mildly evocative, despite her difficulties at the Golden Temple. There is a sense of contemplation, a ceremony of tea and a hint of wasabe. But a hint is as far as Anna will go, since the tingle in the mouth seems to repel her. Eventually, we see this as inevitable, given the confused, arm’s length English reserve with which she cloaks all life. View the book on amazon Sir Phoebus's Ma

The Successor by Ismail Kadare. Things are often not what they seem. Usually when this applies something ostensibly great turns out to be merely mundane. Occasionally, however, we meet an iceberg, an apparently small presence that becomes something vast and consequential. This latter case applies to The Successor by Ismail Kadare. The Successor is apparently a small book. The cover shows a head in silhouette while a hand with a gun points from the left. “Just another predictable little thing in a predictable genre,” were my initial thoughts. The cover illustration is apposite, however, and remains so throughout the book’s short duration. But in fact The Successor then reveals itself as a vast work, despite its obvious brevity. It’s about nothing less than a whole country, its politics, its very identity in a world that is changing around it. The country is Albania and Ismail Karade is clearly born of its very soil. At least that truth is reliable. But how would we describe a successor who does not succeed, a guide who has lost the power of sight, an architect whose plans are ignored and a young woman engaged to be married who is not in love? Things are often not what they seem to be. The Successor has been shot, hence the cover. And yes, The Successor is a whodunnit, but in no way is it predictable. When a whole nation identifies with and is driven by the political choices of its leadership, how can it ever change organically from within? The figurehead has to go, even if he has already gone! And if change was the product of poor judgment, then should history record a suicide? And from whose perspective do we assess success? And who has the right to change history? In his preamble, the author humorously sets the tone by announcing that “any resemblance between characters and circumstances of this tale and real people and events is inevitable.” Thus, in a short book about a feud within an inner circle, Kadare creates a poetic world that mirrors reality, whose delicately-drawn images beautifully construct much larger ideas. The poignancy of a secret door that can only be opened from the outside is an idea that will last for a long time in a reader’s memory. The Successor is a great little book. View the book on amazon The Successor

Posted by philipspires at 11:27 AM No comments: