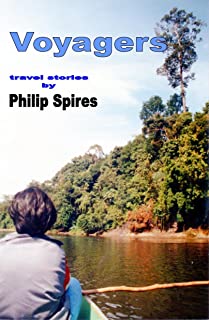 People should not do quite a number of things, including reviewing their own work. Well, I suppose that’s another resolution I have just broken, because here is Philip Spires’s review of Voyagers by Philip Spires. Voyagers is a set of short stories loosely based on the experience of travel. They all portray a srong sense of place alongside characters that find themselves in unfamiliar settings. Several of the stories have grown out of personal experience, or sometimes events I witnessed along the way. I have traveled a little over the years and it has always seemed to me that when a voyager ventures beyond the habitual comfort zone, then the potential for surprise and challenge increase, thus presenting opportunities to learn. And that learning, as often as not, is about oneself. Voyagers begins with Discoverers, a novella. Mr Tony has worked several contracts as an expatriate biology teacher in Brunei. We meet him as he sets off with yet another group of students on a field visit into the rain forest. These are jungles he knows well and loves. They are, however, under threat, and are being burned by people trying to establish building rights. Mr Tony has a campaign against these illegal practices and his efforts are about to uncover publishable truth. He learns over a long weekend, however, that people of power have their own schemes to stop his work. Assessors is a grovelling email written by a professional of the future who has seen his status redefined. The story was inspired by an interview with the physicist Michio Kaku. On a morning when London Heathrow’s new terminal could not match passengers with their luggage, he confidently claimed on BBC Radio that the near future would confirm our ability to tele-transport entire molecules in real time. Initiates is also set in Brunei. Aussies Ted and Sylvia have been invited to a Malay wedding. Ted works alongside the bride most days and knows her well, well enough of course to be invited to this normally wholly local event. Despite easy-going friendship and apparent shared experience, however, there is one part of the day’s custom that reminds both Ted and Sylvie that they remain mere guests in this place. I know that the principal characters of Protesters did in fact meet. One, a president of a Central American republic outlawed by the West was to address a solidarity group meeting in Westminster Central Hall. An aged writer – and a very famous one as well – is also present. His personal history suggests a pointed conversation between the two men, a conversation that forms the story. I put them together for a few minutes before they emerge to deliver their speeches. Predators is set in Nya Trang on Vietnam’s beautiful coast. A holidaying couple find themselves witness to predatory acts along the hotel corridor. Candid observation of the society and their surroundings suggest that such exploitation might not be too rare. A few decades later, the memory comes home. Seers is set in pre-war Yugoslavia. A group of Australian travellers are caravanning across Europe. In a Dubrovnik café they meet a bar-fly who likes to brag about the quality of his contacts. There may be truth in some of his words. He may even be the arms dealer he claims to be. Who knows? Strangers is the shortest of the stories. Set in England’s north Devon, a couple on a long weekend seek rest and recuperation in an idyllic coastal village. They idyll soon fades to a reality as they learn more of local lives. Victims is a set of emails. An aid worker finds herself caught up in the complications of struggle in Sri Lanka. She seeks advice on how to deal with the unique position she occupies by virtue of the information she has learned. Who does she think she is talking to? Whose interests will prevail? And is she, herself, now in danger? Wonderers follows a retired Englishman who is trying to pay his personal homage to wonders of the ancient world. These dependable, classical, trustworthy images of unquestionable greatness and significance offer him confirmation of the psychological stability and order he craves. His means of accessing them, alongside the contrasting and challenging experience of visiting them offer up difficult questions, however. He finds an answer that surprises him. Worshippers is set in Florence. A recent art school graduate finds her life at a crossroads. Her secular upbringing has created a near-religious commitment to art. But her own identity and self-obsession often appears at the centre of her universe. She meets a resting actor, a man whose pragmatism seems at first to be attractive. But he is troubled by something, an emotional response she resolves to uncover. They do seem to share a passion for art until, that is, aesthetics get in the way. Voyagers thus examines how a traveller’s identity might be simultaneously questioned and confirmed by the surprising moments that arise when we are beyond our own context. The voyagers themselves sometimes emerge both richer and wiser, but sometimes their limitations are merely confirmed. Voyagers is available both as a paperback and an ebook, including a Kindle edition.
Posted by philipspires at 2:29 PM No comments: