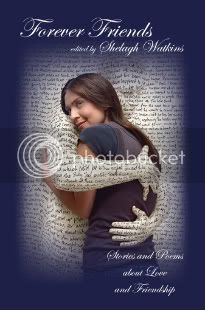 Thank you for reading this blog entry! This is the seventh post on the Forever Friends blog tour and we have made it through the first week! Thanks again to everyone following the tour for your support! I hope the next seven days are as enjoyable and eventful as the last seven days. On Tuesday, the book finally became available at the amazing price of $9.99. This was a mistake made by amazon.com that allowed many members of the Published Authors Network and forum to take advantage of their mistake. You will find a link to amazon.com at the bottom of this post. The same day the book became available from all the online bookstores, I received the first review of Forever Friends by Apex Reviews.

In the review, the reviewer, Linda Waterson referred to the different sections in the book:

Compiled in various sections, ranging from “Family Friends” to “Lost Friends” to “False Friends” to “Spiritual Friends,” the literary offerings contained therein just as equally travel the full spectrum of friendship, covering all imaginable ground in-between. There is reminiscing over childhood heroes, protectors of the four-legged ilk, and gracious musings over friends who were – quite literally – lifesavers. There are also poems that wish for the spreading of global goodwill, as well as verses rendered in homage to friends that are gone, but not forgotten.

She also made reference to the use of quotes at the beginning of each section:

For added contextual flavor, preceding each section is an insightful blurb helping to foster within the reader a greater understanding of what that particular facet of friendship is really all about. Consider, for example, this literary jewel that precedes the “False Friends” section:

False friends are like our shadow, keeping close to us while we

walk in the sunshine, but leaving us the instant we cross into the shade.

Philip Spires short story, Stranger than Friends, is the first book in this section. The well-crafted characterizations and authentic dialogue make for an entertaining read. The boredom of the staff and the insensitivity of the clientele in the bar of the Old Hotel in an off the track village, are all too obvious to an unmarried couple staying at the hotel overnight. In the morning, things have come to a head and one family will not be the same as it was the night before as people who were once friends become strangers to each other. I would like to congratulate Philip on a story that draws in the reader right from the beginning as two strangers descend the steep path to a small tightly-knit place, where outsiders are welcome – but only for a short stay.

I would also like to thank Philip for inviting me to make this post on his blog and for giving me the opportunity to add a bit more information about the anthology.

It isn’t too late to order a copy and, as I keep saying, you will not be disappointed!

Forever Friends is available now from all major online stores, including amazon.com:

Thanks again for reading this and best wishes for the holiday season!

Please follow the tour to learn more about the book.

Posted by philipspires at 1:25 PM 5 comments:

Over By Christmas by William Daysh 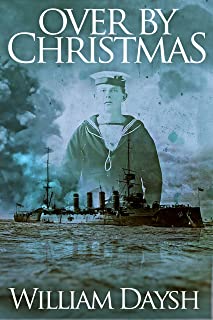 Over By Christmas by William Daysh is a war novel. It is also a superb novel in which real events, imagined histories, human relationships and politics intertwine. These elements are combined via a beautifully paced narrative whose use of multiple forms only adds to its clarity.
While naval battles of the first half of World War One are described, we encounter some of the politics that generate their necessity. We see the in-fighting and posturing around the desire to avoid responsibility. We share the priority of a Prime Minister who, amidst the pressure of decision, remains obsessed with a young woman – and not for the first time! – a woman to whom he is compelled to write, often several times a day. There are numerous factual reports of the war. These provide the background, the context to allow us to position the experience of the book’s characters.
And central to these are the Royals, not the rulers in London, but a naval family in Gosport, Portsmouth. Jack the father and George the son are seamen, while Emily, wife and mother, is their home port. In his spare time, which seems to be quite sparse, George is a bit of a lad. He is a handsome, honest type who falls for two girls in particular, Carrie and Carla. The first is a single mother, left encumbered but compensated by a period of “service”. The latter, a minor character with a major role, is a dusky-skinned, half-Italian shop assistant.
And then there’s Bill, who takes up with Carrie, and then later with a Mr Paxman to further his growing business interests. But throughout there is the war. Throughout there is the threat of suffering alongside the daily reality of early death, the hell of battle. War, and especially this one, claims many lives and takes them arbitrarily, though never without loss for those who survive. The wounded, it seems, sometimes have to cope with more than death.
George emerges as the central character of Over By Christmas. We follow him repeatedly to and from Portsmouth. He sees The Pacific and the South Atlantic. He sails around Britain into the North Sea. He is in Malta and Gallipoli. Above all, he is in the war, perhaps not muddied in trenches, but permanently threatened by torpedo, shell and sea. He makes friends, is loyal, and gallant and is promoted. But throughout, his passion for Carrie remains. Chances to reconcile their differences, to realise their shared love are rare, but important moments. And then… And then this is the beauty of Over By Christmas.
The narrative engages the reader in its characters’ lives. In twists and turn it surprises, but in the end we have merely the complications of human relationships. Warfare is about sparring, about conflict, imagined gains and suffered losses. Affairs of the heart may demonstrate strikingly similar qualities.
View this book on amazon Over By Christmas

Posted by philipspires at 3:43 PM No comments: