Istanbul: Memories And The City by Orhan Pamuk 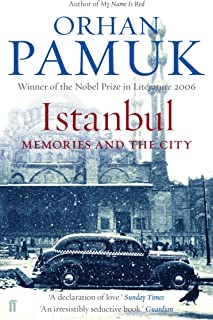 Near the opening of Istanbul: Memories And The City, Orhan Pamuk suggests that “at least once in a lifetime, self-reflection leads us to an examine the circumstances of our birth”, to examine family, identity and origins, perhaps to find if we might have deserved better. Thus this master prose applies his art, his skill to weave an intricate and detailed tapestry of a city with its history, customs, architecture and feel embroidered around the story of the writer’s early years, spent in a domesticity somehow short of bliss.
The book, no doubt, is an instalment, since it ends with the young Orhan Pamuk out of college declaring he wants to be a writer. There remains, therefore, a lot of story yet to be told. There is a crucial concept, Pamuk tells us, needed to inform our experience of this place. It provides a clarifying lens that not only magnifies and intensifies, but also interprets. In Turkish it’s called hüzün, which roughly translates as melancholy. But it is not the melancholy of melancholia. It is not unhappiness, and is far removed from depression or anything else clinical. Orhan Pamuk returns to this word and its meaning throughout the text, but usually to skirt around its core, to illustrate rather than define.
As I read Istanbul, the more I was convinced I was dealing with an idea that spanned both humanity and humility along one axis, married with reflection and mortality along another. The concept explains why this city, when seen through foreigner’s eyes, has been either a comment on history, a judgment on squalor, or a romance on the exotic. Whether it’s the engravings of Melling or the words of Flaubert, Western visitors have tended to exaggerate, to concentrate on things the locals take for granted, whilst ignoring those that fire them. Compared to local writers whose views are no less partial, it seems, the visitors tend to concentrate more on the picturesque, what can be observed and recorded rather than what can be felt or interpreted. Those born or living in the city are in contrast part of its fabric, conscious of its design, more able to follow a thread of meaning. Pamuk follows such a political thread through his book.
The country’s modernisation under Ataturk is a constant theme. It was an ideology, Pamuk declares, that convinced his family that, as Westernised, positivist property-owners, they had the right to govern over semi-literates, and a mission to prevent them becoming too attached to their superstitions. Such acute and astute observation, laden with irony, is also revealed as having penetrated his own psyche. Elsewhere, he tells us that while he might remain uneasy about religious devotion, he, like the secular bourgeoisie in general, feared not God, but the potential fury of those who believed in Her too much. He also, quite early on, introduces the reader to his suspicion, nay fear, that he himself has a duplicate existence in another place elsewhere in the city, perhaps in the same form, but with a separate, independent identity.
Readers of Pamuk will notice here a theme that seems to pervade his work. The city itself has had at least three separate identities, all played out by different occupants, their origins in a multiplicity of cultures and places. And so it may be with the individual. He did not choose to be born into this identity, this skin, this psyche. By chance he might have a religious fanatic, a merchant, a Sultan, a boatman or a moderniser as a father, and any of the same – less Sultan – plus more as a mother. He might have changed direction in his own life, have become the architect he aimed for, have been a painter, or might have even married the first love who modelled for his portraits.
Throughout, he might have been someone else, or indeed have merely represented a type, a class, a privilege, a poverty. Are we discussing the individual, an individual, the writer, a writer or, as a generality, anyone who might or might have once lived in this place and thus adopted its identity? Thus lives, like places, are to be interpreted, reinvented by the eyes that view them. A writer, perhaps, invents nothing in his fiction, the production of which becomes merely a search for the self who, by accident of history, becomes fixed in an individual that remains, inevitably, in a state of change.
This beautiful, moving book, one hopes, is just the start of an autobiographical project. Like life itself, I anticipate a future whose attainment I possibly might live to regret. Hüzün.
View this book on amazon Istanbul: Memories of a City

Posted by philipspires at 5:03 PM No comments: