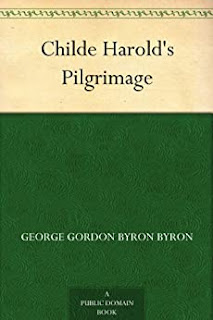 I finished a novel recently. In Eileen McHugh, a life remade, I created a character called Alice, an art teacher close to retirement, as the principal character’s sculpture teacher during her first year as an art student. The structure of the book demanded that the story, set in the 1970s, should be told by contemporary survivors from today’s perspective. Alice would not have lived until now, so I passed the responsibility of her character to her son, a physics professor in a university in the north of England. I had already decided on the surname of the artistic household in which the son grew up. It was, by chance, Childe. These two artist parents, one three-dimensional, the other two, would certainly have chosen a one-dimensional name for their son, so I called him Harold, Harold Childe. It was a joke.

Then, a few days later, I heard a performance of Harold in Italy, the viola concerto in all but name by Berlioz. Somewhere in this drug-fuelled Romanticism there was an account, or perhaps the mere reflection, on Byron‘s Childe Harold’s travels through Italy. It occurred to me that I should re-read the poem. I read it first when I was the age that my character, Eileen McHugh, was in her art college and high most of the time. I could now remember next to nothing about it, despite myself never having ever got far off the ground.

It’s an heroic poem by the also drug-fuelled Lord Byron, written in nine lines stanzas, eight pentameters followed by the terminating Alexandrine. It rhymes ABABBCBCB, meaning that five lines in every stanza rhyme in a traditional manner. In it, our eponymous hero traverses the Mediterranean by sea, if that’s linguistically possible, and visits many places where an artistic education might recall classical allusion. Throughout the journey, he calls in to places with millennia of evident history and proceeds to show off much of what he knowns, all learned within the confines of an English private education. Childe Harold remains self-obsessed, always eager to place his own responses at the forefront of his thoughts, often in spite of external stimulation. But that’s Romanticism, isn’t it? And had I not just written about Eileen McHugh, a 1970s concept artist who imagined meaning into everything she might choose to juxtapose?

Some years ago, I wrote a novel that attempted a loose parody of Don Quixote. It was called A Search for Donald Cottee. I am the person who wrote it, so you will be unsurprised by my estimation of success. I was particularly proud of my updating of the episode in the Caves of Montesinos. I began to wonder how one might parody Byron’s Harold some 200 years on from its conception.

So rather than review Childe Harold, which has probably been done, what I offer here is a plan of parody that may never be written. The first two stanzas, for me, if experienced today, would be a Mediterranean cruise. Let’s not experience much at first hand but take pleasure in being dropped off for a passing couple of hours in the protected zone of somewhere famous, visited, historical, as specified in the brochure. A diary, kept by our cruiser, written in verse, is Childe Harold 2020, with sections copied from the handouts given on the onshore day trips. It’s not Childe Harold’s nor any other passenger’s reflections on experience that forms the gist but grab quotes from the tourist notes supplied to anyone who was paid for the excursion.

The later stanzas do travel inland. How we get from A to B is largely ignored, but Byron rarely strays anywhere off the Grand Tour. In contemporary terms. it’s surely a bus trip, a 50-strong group of the kind that marches, chattering, past the wonders of Neapolitan art in Capodimonte, to be loudly lectured in front of the Caravaggio, in Milan ignores the Brera to marvel at the Last Supper’s peeling plaster and congregates surround the copy of David in front of Florence’s Palazzo Vecchio. I think I jest. But Naples is rather too dirty to walk around, isn’t it?

What interests me in 2020, is the fact that the coronavirus pandemic would make both cruise and bus trips rather difficult to pursue. The barriers are obvious and I will not even try to list them. So how would Childe Harold 2020 manage to suffer his cascaded paroxysms of emotion?

Online, that’s how. WebCams, Wikipedia, TripAdvisor, Airb’n’b reviews, restaurant evaluations complete with owner’s apologetic comments about the service, that’s how our lockdown 2020 Childe Harold might play his viola. Imagine the locked-down pensioners at home. Where did you go today dear? I had a walk around the Uffizi. Ignored the crap. Just looked at the Canalettos. Read about them as well. Views of Venice, apparently. The poem will be epic.

Posted by philipspires at 4:52 PM No comments: