The Autograph Man by Zadie Smith 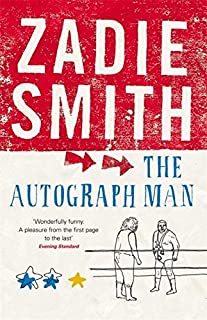 In her novel The Autograph Man, Zadie Smith takes a comic tour of several aspects of twenty-first century life. Her foci are celebrity-worship, consumerism, identity, ethnicity, globalisation and religion – quite a mix! It is an entertaining and, in places, slick tour of contemporary issues. But in the end the whole is perhaps something less than the sum of its parts. Throughout it’s a farce that threatens to become a drama, but its threat is eventually empty.
Alex-Li is an autograph man. He is half Chinese, lives in London and is Jewish. He is introduced to the joys of autograph collecting on a childhood visit to the Royal Albert Hall to see an all-in wrestling match featuring Big Daddy and Giant Haystacks. These characters, faking both their identity and their activity for a television audience, are themselves symbols for the territory the book inhabits. In their own ways, all the people in the book are trying to become a projected image, an image that might, on occasions, have something to do with who they are, but the relationship, it seems, cannot be assumed.
At the beginning, Alex-Li is a child whose father is ill. Later we meet him as an adult. By then he has graduated from autograph collector to autograph trader. He has raised his passion to the status of a religion, replacing traditional symbols of devotion with a hierarchy of celebrities, their elevation related in part to the tradability of their name.
One by one, Alex-Li adopts them into the assumptions of his faith. Unfortunately, this potentially powerful image doesn’t come off. The parallels are too crude and obvious to rise above the trite, and yet at the same time too hyperbolic to be effective. His ultimate icon is Kitty Alexander, a Hollywood actress of Eastern European origin to whom Alex-Li is drawn at the level of obsession. He has sought her autograph for years via his fan mail and now wants to pursue other channels. A drug-dealing millionaire, a couple of old friends and Esther, a girlfriend complete with a pacemaker, all complicate the plot.
Alex-Li does travel to New York where the real Kitty Alexander may be found. He meets many people, some of whom help and some of whom hinder. A famous prostitute called Honey becomes a companion and does eventually secure contact with his object of worship, Ms Alexander who, of course, proves to be somewhat different from the celebrity projection. The Autograph Man harbours a multiplicity of references to popular culture. The book hints at this consumption of manufactured experience as enslavement. It also suggests that ordinary people’s release from traditions that offer no inclusion might be liberation. It dabbles in drug culture where anything may be traded, especially the worthless. Individual and community identity, both fundamentally confused by globalisation, can themselves be commoditised and thus blended like a favourite coffee or cocktail. As such, they become nothing more than transitory, relying more on a mix of nostalgia and aspiration than commitment.
So why not throw in a portion of Buddhism, a pinch of Zen into the mix? Why not? Why? Ultimately this last question is the word that undermines The Autograph Man. It is too coherent to be absurd, too falsely constructed to convince, too disparate to inform. Random juxtapositions are capable of producing wonderful witticism and occasional insight, but when this is done with a conceptual framework for a novel, the result is sometimes enjoyable and occasionally interestingly constructed, but eventually unrecognisable and probably meaningless. View this book on amazon The Autograph Man

Posted by philipspires at 10:50 AM No comments: