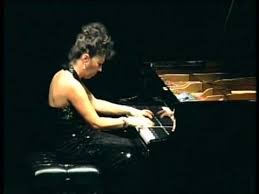 During a recital some years ago, a pianist introduced a Chopin Impromptu by describing its improvisatory essence, likening it to a snapshot of perhaps transient musical ideas, a significant but mere facet of genius. After the concert, a regular at our private gatherings took issue with the pianist. “How could we, the listeners, possibly know that such a piece was largely improvisatory unless you told us? Isn’t it all just written down, composed music?” The pianist politely declined to engage, since the customer is always right. “Just listen!” ought to have been her response. Contrary to much popular belief, improvisation has played a large part in the development of so-called “classical” music.
Not only Chopin was noted for a brilliance of passing invention. Beethoven improvised. Listen to the Sonata Opus 111 – especially under the fingers of Rudolf Buchbinder – with an expectation of jazz. There’s a whole sequence somewhere between boogie-woogie and ragtime – from a hundred years before anyone else thought of either! Bach improvised. After all, there’s a whole raft of his compositions called “inventions”.
An improvisatory quality introduces a sense of genuine surprise into the musical flow of a piece, a tangent to the argument that can conjure the unexpected. Many pianists also include improvisatory elements in performance. It’s nothing more than an element of what we generally refer to as interpretation. A hint of rubato for some might be a lack of accuracy, whereas for others it’s interpretive genius. Similarly, new improvisatory approaches to the Baroque ground bass are perhaps closer to how it would have been played originally than the mechanically ground-out pluck of more recent past decades.
There are times, of course, when an improvisatory approach, however minimal, would be inappropriate. I cannot imagine Webern played in any other way than indicated in his micro-managed scoring. And for all its jazz-like elements, minimalism works because of its obsession with the detail of infinitesimal change, detail that would be lost if either over-worked or over-stated. Now despite these close bonds between so-called “classical” music and improvisation, I usually avoid anything that purports to link the approaches. The experience of “classical” celebrities “crossing over” generally generates muzak. When popular artists join “classical” friends, the artistic, if not financial, result is usually embarrassment for both. Carla Bley, Frank Zappa and Keith Jarrett might exemplify a counter-argument. But then where would you site such talents in the first place? Menuhin and Grappelli collaborated successfully, despite Menuhin describing the experience as vamping while an improvisatory genius played for ever without once repeating himself. No doubt the awe would have flowed in the opposite direction if the material had been Elgar.
So it was with some trepidation that I approached Elena Lasco’s recital in May 2009 in L’Alfas del Pi. Forming part of the unique Spain-Norway Festival hosted by this little Norwegian town on Spain’s Costa Blanca, Elena Lasco’s concert advertised a classical and jazz programme, but thankfully no cross-over, which would only have made me over-cross. In the first half, Elena Lasco played a set of Schumann Variations, Grieg’s Norwegian Dances and Cordoba and Seguidillas by Albeniz. Make no mistake, however. Elena Lasco is no part-time classical pianist. She studied for ten years in Moscow’s Tchaikowsky Academy and was already something of a prodigy as well. Her pianistic and interpretive skills are from the top drawer. When one adds to that five years of master classes in the famous Jazz Academy of Moscow’s Gnesin Academy the mix is not just virtuosic and persuasive – it’s totally convincing.
The rhythmic fluidity matched with complete control that she brings to pieces like the deceptively demanding Norwegian Dances of Edvard Grieg render them nothing less than a revelation. Albeniz always does benefit from rhythmic fluidity, in my opinion. It adds a commentary to the angularity and occasional abruptness of his style. And even in the Schumann the suggestion of an improvisatory edge merely added to both the drama and virtuosity.
The second half of Elena Lasco’s Alfas recital was devoted to jazz standards and her own compositions. Appropriately we heard a homage to Errol Garner alongside some standards from the golden years of jazz. Elena Lasco’s improvisations are impressively inventive and always swing. We are transported to the world of Garner or Peterson, not Cecil Taylor or even McCoy Tyner. It’s a jazz Romanticism, infused with the personal, the memorable and occasionally the spectacular, but only for its melodic or rhythmic impact, never merely to impress. It’s a style that does not aim to confuse or obfuscate. This is musical story-telling at its most communicative. On 15 October 2009, Elena Lasco will make her London debut in the Conway Hall. She will present a jazz programme and entry to the concert will be free. Again she will feature jazz standards alongside her own compositions. Londoners will thus have the chance to experience what the privileged full house at the Spain-Norway Festival in L’Alfas del Pi lapped up in May, or indeed what Elena Lasco’s 200 million Russian television audience could not get enough of. Elena Lasco’s is a unique mix of talent and style.
Posted by philipspires at 1:25 PM No comments: