The Reluctant Fundamentalist by Mohsin Hamid

Initially, the form of The Reluctant Fundamentalist by Mohsin Hamid seems forced. Surely it will restrict what the author can achieve. By the end, however, the form has become a crucial part of the plot. The turnabout then works very well indeed.
Changez has returned to Pakistan from the USA, where he both studied and worked. He is in conversation with a foreign visitor to his country. Apparently they are sitting in a café. The visitor is probably an American but, surprisingly, the conversation is entirely one-sided.
Basically, Changez tells his life story, eventually relating in detail the conspiring events that led him to his current preoccupations and status. He was the child of an upper class family in Lahore. He was a bright thing from the start and when the time was right a place at Princeton beckoned. He excelled and was offered a job with a business consulting group, where he learned much more than merely contemporary jargon. He also fell head over heels in love with an American girl, herself a gifted student with a desire to write.
She wanted to tell stories, beginning perhaps with one featuring herself and describing her former boyfriend’s struggle with terminal illness. Initially at least she seems newly besotted with her new Pakistani friend, with Changez’s unexpected and wholly foreign politeness, good manners and dress sense all creating favourable impressions. The silent listener absorbs all this without comment as he and Changez await their food in a Lahore restaurant.
Everything looks rosy for our graduate and the listening tourist seems to respond to the raconteur’s story. The narrator then begins to describe a new era, an era that began on September 11 2001 and the destruction of the World Trade Center in New York. The Reluctant Fundamentalist’s tone changes abruptly as the world and the individual’s place in it seem to need reinterpretation.
As things turn out, Changez returns to Pakistan, where he takes up teaching. And still our listener absorbs the story without response. The book’s denouement is both surprising and satisfying. The form that has seemed to be a handicap suddenly contributes to the experience. We are left with an enigmatic, open ending where surely something will happen.
Mohsin Hamid perhaps allows each of us to fill in some blanks. Mohsin Hamid’s The Reluctant Fundamentalist is quite a short book. It possibly just exceeds the novella form. But in a succinct and sophisticated way it addresses and comments on some complex issues. Its methods are both sympathetic and involving. Its efforts convince the reader without being didactic. It is thus a significant achievement.
Posted by philipspires at 10:58 AM No comments:

The Battle For Spain by Anthony Beevor 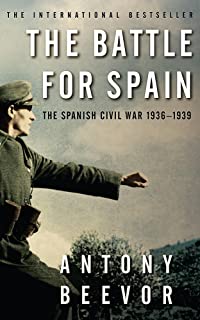 Occasionally, very rarely in fact, one comes across a thoroughly outstanding book. From beginning to end it’s authoritative, clearly written, lucid and somehow both committed and balanced. Eventually such a work will take a clear position, but it will never approach polemic. Such books are indeed rare, but Anthony Beevor’s The Battle For Spain is without doubt one of these few great works.
The Battle For Spain chronicles the Spanish Civil War, 1936-9. Anthony Beevor examines the political, economic and social background of the country prior to the war. He identifies historical context and offers explanation of why Spain found itself in a position of near-irredeemable political impasse in the 1930s. He also examines the movements, parties and associations that existed at the start of the struggle, alongside institutions such as the Church and monarchy that also played significant roles.
So well portrayed is all the in-fighting, intrigue and manoeuvring that we feel we almost get to know the characters involved. The reader constantly has to remember that this is not mere fiction. Its immediacy almost tricks us into thinking that these events might be just some thought-up plot created merely to keep us involved.
But then the casualty figures start to stack up and we are reminded by the executions and the refugees that this is a bleak and stark reality. The story’s detail may come as a surprise to the casual reader who remains unaware of just how intense and bloody this conflict was. Anthony Beevor also provides the essential geopolitical context of the Spanish Civil War. He identifies how the rise of fascism and communism in the years preceding the war both played their perhaps inevitable roles by backing their favoured sides in the conflict.
It was inevitable in a Europe that was already unstable. Spain was a prize that would add weight to any interest. Perhaps the most interesting aspect of The Battle For Spain is its description of the role played by the northern Carlists. Much has been written about the Falange, the POUM anarchists and the communists. But little usually emerges about the religious conformists who played a significant role on the Nationalist side.
The character of Franco eventually comes to dominate proceedings. He is revealed as obviously victorious and without peer, but he also sometimes dithers, lacks judgment and seeks rather unsuccessfully to play off one side against another. He is not alone, however, in that the British and the French displayed the same skills or ineptitudes, depending on which side you take.
But where The Battle For Spain excels is in its catalogue of the horrid events of the war. The detail of Anthony Beevor’s account really brings out the confusion of conflict alongside the luck and opportunism on the one hand and incompetence and chance on the other. It’s a cocktail of these that grant both victory and defeat. Just ask the dead, the wounded and the refugeed.
Posted by philipspires at 10:55 AM No comments:

None To Accompany Me by Nadine Gordimer Life often presents an illusion of constancy or even continuity. They are illusions, of course, because ultimately we can never take anything for granted. Just ask the last friend who died. Equally, however, there are always things that we work towards, goals whose continued non-achievement gives life both meaning and direction. Surely we fear their achievement, because everything would then have to be redefined, a process that would prove at least messy.
This is the territory of Nadine Gordimer’s novel None To Accompany Me. For me the title signifies how every individual, when confronted with the necessity for change, must pursue personal, perhaps even selfish goals.
In None To Accompnay Me Nadine Gordimer presents characters in a newly-liberated, but as yet ill-defined South Africa. The struggle has been long. It has also been defining for its participants. It allowed differences to be ignored, splits to be papered over. It convinced some of a necessity to over-react, to over-compensate.
And then, when the uniting goal is achieved, all realise that opposing is a less complicated act than supporting. We all know what we are against, but what we are for can only be argued. Like Byron’s Prisoner Of Chillon, experiencing the security of captivity can seem reassuring when the unknown of freedom is finally achieved.
Vera is as central a character as any. She’s white, married to Ben, has a daughter and has worked for liberation. She devoted just less than her life to the cause, less because she has retained an element of selfishness in her personal relations. So loosely intertwined are all of the strands of her life that change in one can apparently unravel all of them. And then there’s Dydimus and Sibongile, also lifelong devotees of the cause. Opportunity begins to divide them. So does their past. There are new positions of responsibility to be adopted, politics to be worked out, compromises to be made. But there are also deeds from the past lacked away, skeletons that can be marched out for other’s convenience.
And not all of them are personal. The major issues of the time appear in the book. Cultural and economic differences between black and white cannot be escaped. Neither, it seems, can the prevalence of violence and crime. A pressing need to redistribute land will have to engage in battle with those who own it and want to exploit it. A nation whose majority has never been asked its opinion has to learn to live with the fact that the question’s answers now promote division above the assumed unity of the past. And, if this is not already sufficient complication, those released from struggle must also come to terms with a generational shift.
Progeny do not seem to have the same values. Whereas community was demanded by struggle, freedom promotes the individual, allows personal decisions that the older generation would not have tolerated. A reader looking for a linear experience with characters wheeled on and off the set in order to assist a plot’s continued progress will truly hate None To Accompany Me. A reader with the patience to get to know people, to empathise with them and share their dilemmas will appreciate the non-linearity, non-literalness of Nadine Gordimer’s book. It is certainly a novel of its time, a period of uncertainly presenting perhaps an illusory cusp between a known past and an unknown future. Eventually we must ask if this state is anything unusual.
Posted by philipspires at 10:53 AM No comments: