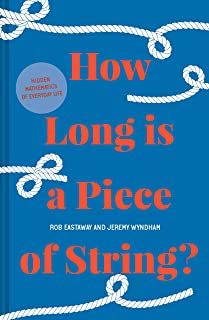 If you have a couple of hours to spare and are intrigued by apparently simple problems that turn out to be more complex than they seem, then Rob Eastaway and Jeremy Wyndham’s book How Long Is A Piece Of String? would be an engaging way to fill the time. This is a carefully constructed book, with each of its sixteen chapters occupying about ten pages. There is just enough space to introduce an idea, pose a couple of questions and then deliver suitable solutions. The style is a little polemical, since there is not much space for the reader to investigate. But overall the material is well thought out and offers one or two surprising ideas. Each chapter poses a question. How Long Is a Piece Of String, Am I Being Taken For A Ride, What Makes A Hit Single, Is It A Fake are just a few examples. In Am I Being Taken For A Ride the authors explain the logic of the taxi fare. It’s ironic that as the chapters go by they themselves have something of the air of a driver eyeing the customer in the back with an associated, “And another thing…” The authors consider chance in game shows alongside how soon a drunk will fall into the ditch. Their analysis of how predictable sporting contests might be might itself also explain why I gave up watching tennis decades ago. They examine fractals and make a tree and then conclude that numbers quite often start with one. You may find this last revelation surprising. I did. All right, it’s populist stuff, but there is enough mathematics to keep the specialist interested for a couple of hours. The book is strangely but usefully illustrated and some of its explanations are extremely well presented. It’s undoubtedly a worthwhile read. Oh, and How Long Is A Piece OF String? Well, as Richard Feynman famously answered, it depends on the length of your ruler.
Posted by philipspires at 2:53 PM No comments: 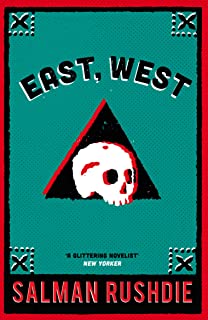 East West is a short collection of short stories by Salman Rushdie. But there is nothing small or even limited about the themes they cover, nor anything bland about the palette Rushdie uses to colour his ideas. They were published in the mid-1990s, when the writer was deep into the confines of the fatwa that threatened his life. It is thus refreshing to reflect on the wide and poignant use of humour trough the collection. The stories are enigmatically arranged in three groups entitled East, West and East-West. They thus form a kind of triptych.
In East we visit territory well known to readers of Rushdie. He is in the sub-continent, addressing notions of tradition and culture, notions that are interpreted and reinterpreted by change, personal ambition and by familial and religious associations.
In West, Salman Rushdie presents Yorick’s view of Hamlet and an encounter between Catholic Isabella and her hired man, Christopher Columbus. One is fiction superimposed on fact, while the other approaches the reader from the opposite direction. Both stories turn in on themselves, reverse roles and blur the distinctions between fact and fiction. In East-West we find people in new contexts, away from home, inhabiting places unfamiliar to them. We meet people who impose private, personal structures on a wider experience that others share.
Misunderstandings create their own new language, and fiction expresses and interprets a shared reality. But what is continually astounding about these stories is the literary style that Salman Rushdie brings to almost every sentence. The pictures he draws are surreal, even hyper-real and yet utterly mundane, even prosaic at the same time. A change encounter with a particular object can evoke memory, visual allusion, lyrics from pop culture and tastes of what grandma used to cook. Then, in the next sentence, he can sustain the effect by unloading another bus-load of metaphors. The writing is arresting, but also beautifully fluid and entertainingly readable. For anyone who has tried Salman Rushdie’s novels and recoiled at the challenge of their density, I would recommend these stories as a taster in miniature of what the bigger experience can sustain. Once you are used to the style, it flows easily.
Posted by philipspires at 8:16 AM No comments: