The Seven Sisters by Margaret Drabble 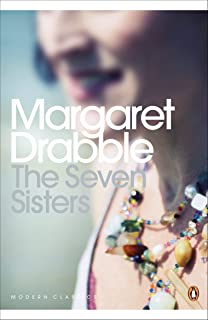 The Seven Sisters is a superb novel by Margaret Drabble. Seven characters – who all happen to be women – eventually find themselves on a classically-inspired Mediterranean journey. It is a trip of literary and perhaps psychological significance. Thus extracted from their respective comfort zones – if comfort is a relevant term to describe their life-scarred lives – they react individually to their collective experience in quite different ways, differences driven by personality and personal history. But almost defiantly they remain a group determined to share the experience.
The central character of the book, Candida Wilton, became a Virgilian. Attending a class to study the Aeneid provided the label and the partially adopted identity. There were others involved, of course, all under the splendid wing of an aging retired classics teacher. Candida has moved to London from Suffolk. Approaching sixty, she finds herself single again, divorced from a husband who has sought more tender pastures in which to graze. Occasionally she blames herself for his desertion, especially when reality focuses attention on herself. Somewhat surprisingly Candida is also estranged from her three daughters, an estrangement for which she usually takes responsibility.
Reality may have offered a different interpretation and indeed at one point we believe we are getting one. Like may aspects of reality, the experience proves illusory. So now alone, after the gentility and perhaps predictability of rural married life, Candida’s move to a small flat in a none too salubrious area of west London presents something of a challenge. As she embarks upon her fight for independence, Candida keeps a diary in which she records events, reflections, descriptions, and almost anything that is commonplace. She swims, she prepares skimpy meals for one, starts to recognise the local down-and-outs and attends her Virgil class. In time she accommodates her loneliness as well as her past.
When an unexpected windfall allows some flexibility in her life, she invites her acquaintances and friends on a journey to Carthage and Naples to follow in the footsteps of their man, Aeneas. The woman they engage as their guide becomes the seventh of the sisters, all of who are women of varied and contrasting backgrounds. They are determined to share their experience, but individually respond to it in remarkably different ways. But collectively they leave Dido to her funeral pyre in pursuit of their wandering sailor.
The Seven Sisters is not a novel with a linear plot where events form the story. Margaret Drabble is a much better writer than that. Her novel is simply about the lives of the women involved, how they cope differently with surviving each day and how they approach life’s demands and rewards. It is Candida’s perspective that is always at the centre of the narrative, and it is through her estimations and reactions that we come to know the others. And so vivid is the portrayal of these lives that they almost leave the page to come alive. They seem to have rather more than three dimensions. Inasmuch as it is possible to know anyone, we feel we know all of these women by the end of the trip. That in itself is surprising because Candida at least is not even sure if she knows herself. In Margaret Drabble’s hands, no life is ordinary and it is the experience of life, itself, to read her engaging and moving novel. The Seven Sisters is no more or less than a remarkable study in character. And Aeneas left Dido. Is there anything new under the sun?
Posted by philipspires at 7:04 AM No comments: