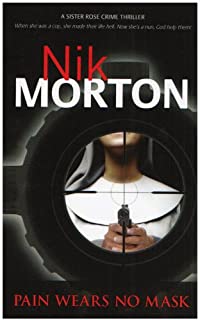 Pain Wears No Mask by Nik Morton is no ordinary thriller. It has an extra dimension that constantly encourages the reader to take an interest in more than a tale of events. It is the book’s central character that provides this extra dimension, because she seems to have two quite different identities. One provides the content of her tale, while the other informs her approach and motives.
As Maggie Weaver, the book’s first person narrator is a policewoman in Newcastle. She is devoted to her husband, also a policeman, and is utterly involved with her work. Like many honest, hard-working law enforcers, Maggie is angered at the suffering of the victims of crime and outraged at the ability of the guilty to avoid punishment. Even greater ire is reserved for the bent cops that facilitate both outcomes.
When Maggie Weaver, the policewoman becomes involved in a particularly brutal case, the final outcome affects herself personally, her marriage and her colleagues. The case is resolved, partially, but the mayhem it generates has permanent consequences.
Sister Rose works in a hostel for the homeless in south London. She has adopted her vocation as a mature woman, trained, taken vows and spent a couple of years as a missionary in Peru. It was there, high in the Andes, working with poor people who have to scratch for a living, that she truly understands the nature of her vocation. When, back in London, Sister Rose finds herself by chance involved in a complex, multiple crime, she resolves to accept the challenge to become involved, to pursue her privately-informed investigation of events.
Sister Rose, the compassionate nun, and Maggie Weaver, the experienced crime fighter and policewoman are, of course, the same person. Maggie’s and Rose’s stories are not presented sequentially, however. Nik Morton begins with the London crime which gradually reveals its relevance to what befell Maggie in Newcastle years before. Thus, both in form and content Pain Wears No Mask transcends its genre. Because of this the reader finds that Sister rose’s future is also as interesting as her related past. When, via Peru, the story returns to Newcastle to confront the unfinished business of years before, Maggie and Rose combine talents, approaches and identities when events promise the settling of old scores and the possibility of reaching beyond the mere foot-soldiers of injustice.
Pain Wears No Mask is a well written, intriguing story. It will entertain those used to its genre, but it will also provide interest for the general reader.
View this book on amazon Pain Wears No Mask

Posted by philipspires at 11:56 AM No comments:

Notes On A Scandal by Zoë Heller

In Notes On A Scandal, Zoë Heller presents a novel narrated by Barbara Covett, a history teacher in St. George’s, a comprehensive school in north London. When Bethsheba Hart joins the staff as a pottery teacher, Barbara realises that a special person may just have entered her life. Sheba seems to be much that Barbara is not. She is younger, attractive, apparently free-thinking, married, has children and is irretrievably middle class. What she is not, unfortunately, is an experienced teacher, having trained only after bringing two children into adolescence. She is thus going to find life at St. George’s rather tough.
For reasons best known to herself, the sixty-ish, self-assessed “frumpy” Barbara decides to keep a journal. Sheba figures in its pages and eventually comes to dominate them. It is an out of character pastime, perhaps, since Barbara seems to have little but contempt for her colleagues, and survives her educator’s role by constantly keeping her students at arm’s length. Perhaps this is what Barbara has done with every aspect of her life, despised it and shunned it in one. Strange, then, that Sheba, her character, her actions, even her words come to dominate Barbara’s thoughts.
Like many who meet this new teacher, Barbara becomes apparently infatuated with this elegant, apparently free spirit. And also, we learn, does one of her pupils, a fifteen year old boy called Stephen. Sheba, of course, is not the confident, satisfied, fulfilled dominatrix that others invent. She is a vulnerable, not quite organised mother of two. The elder daughter is a difficult teenager, the younger son disabled. Her husband is considerably older than her. Like Barbara, she also suppresses emotion, suppresses it, that is, until it takes over her life with abandon as her relationship with the boy simultaneously fulfils both reality and fantasy.
It lasts for several months before it inevitably comes to light. Barbara’s role, throughout, is central. She is in the know. She is watching. She is not in control, of course, but exercises considerably more power than an onlooker. And when, eventually, the muck hits the fan, Barbara, who has done her share of the slinging, gets hit by some of the fall-out. The denouement is both surprising and logical. Though it is Sheba’s motives that the police, the national press and her colleagues want to dissect, it is Barbara’s that must interest the reader. She as been an informed, motivated diarist, it seems.
View this book on amazon Notes on a Scandal

Posted by philipspires at 11:55 AM No comments:

A Sunday At The Pool In Kigali by Gil Courtemanche 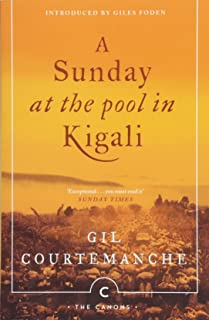 For me, Gil Courtemanche’s book, A Sunday At The Pool In Kigali, bore a great similarity to the screenplay for the film Hotel Rwanda. Having seen the film twice, it is a positive statement about the book to state that I did not make the association until almost two thirds of the way through. On the other hand, much of the material I did not associate with the film verged on the prurient or scatological. Much of what rose above this level eventually depressed, because it addressed like an obsession the detail, the consequences and the pathology of AIDS. The doubly unfortunate truth about the last two sentences is that the book probably, in its excesses, under-states the reality.
An enduring memory is a character, a visitor to Rwanda, seeing what he takes to be a cultivated hillside and then praising effusively the presence of agriculture in the centre of town A moment later he is introduced to reality by his host who confirmed that the excavation was a cemetery to cultivate the profusions of corpses produced by AIDS. The scenes of genocide that follow can only match the horror of what went before.
At the core of the book is the relationship between Valcourt and Gentille. He is Canadian, a journalist film-maker, who seems at home in Rwanda’s tribulations. Gentile is a woman of virtue, a virtue she plies with ease. She looks like a Tutsi, but is a Hutu. In some ways their relationship mirrors the colonial heritage that at least exacerbated, if perhaps not actually caused the potential for ethnic conflict that eventually ignited so disastrously.
But A Sunday At The Pool In Kigali points to social divisions in an apparently valueless community that sees other people, both collectively and individually, merely as the exploitable given form. There’s not a lot of joy here, even in the book’s copious sex that seems, anaesthetised, to dominate much of the text. But overall there is little to uplift in the book. Almost no-one offers love or compassion. An almost unrelenting torrent of cynicism, abuse, persecution and social degeneration floods from every page. It is a portrait of an almost uncompromisingly ugly and abhorrent experience.
The book is thus an often one-paced, one-dimensional read. The problem, unfortunately, is that it might be accurate.
View this book on amazon A Sunday at the Pool in Kigali

Posted by philipspires at 11:53 AM No comments: