The Secret Scripture by Sebastian Barry

In The Secret Scripture, Sebastian Barry tells a story set in Ireland. As is often the case, this story set in Ireland is very much a story of Ireland, as much describing a nation and a setting as a personal history. But it seems that at least one aspect of the country’s painful relationship with its competing churches has changed in Sacred Scriptures. Gone is the assumption of grace applied unthinkingly by Catholics to their side of the divide. And reason for its removal is the church’s attitude towards women, marriage and motherhood.
In Secret Scriptures these axes of divide intersect to create a story that is effectively a modern virgin birth. It thus creates and presents a Madonna who, in her own way, must be kept above and apart from other women, other people. Late in the book Dr Grene, whose journal forms a large part of the narrative, asks this question: “Is not most history written in a sort of wayward sincerity?” Recollection thus remains sincere, but its waywardness perhaps lies in its selectivity, its particularity. History, after all, is an interpretation of events, not merely a listing, and interpretation always has a point of view. When, however, one’s knowledge of the past is at best patchy and at worst inaccurate, it becomes a new world to be discovered, revealed perhaps by chance, perhaps by design. Dr Grene also writes, “The one thing that is fatal in the reading of an impromptu history is wrongful desire for accuracy.” In the end, it is Dr Grene’s pursuit of such an impromptu history that reveals a stunning truth, a truth that can only be uncovered precisely because of the accuracy, the diligence that others invested in one person’s history. The impromptu history that Dr Grene reads is that of Secret Scripture’s central character, Roseanne McNulty, née Clear.
She is a hundred years old and has, for most of her adult life, been confined within the walls of a mental hospital. Her place of repose is to close and be demolished. Dr Grene is to oversee its demise. Roseanne has decided to write her life story. If Te Secret Scripture has a weakness, then it has a double weakness. Overall, the plot might come too close to the sentimental for some readers. For others, it will be the book’s saving grace. Secondly, Roseanne Clear, frail at a hundred years of age, might be an unlikely figure to write such a succinct, coherent and vivid account of events that happened almost eighty years before. Again we must suspend some belief here, but that is easily done because her recollections are both engaging and credible. They would have been more so if, as impromptu history, they were less concerned with improbable detail. It’s not the events that might be questionable, merely the accuracy of their recollection. But after all, that detail might just be illusory. There was a history in the family, we are told, a history of illness and instability and, perhaps, a history of another, less mentionable, affliction of women.
But in the end none of these are rare. It’s their public acknowledgement or admission that’s unusual. Life and its institutions treat Roseanne Clear badly, but no differently from others identified as afflicted with her condition. She is effectively branded insane by a socially-constructed righteousness that now seems to have lost all of its previously unquestioned authority. She seems to have few regrets, however, except, of course, for a life that may not have been lived. The life in question did, in fact, live, and it became something that reinterpreted Roseanne’s entire existence. Sacred Scripture is a beautiful book. It has its flaws, but the immediacy of its subject and the poignancy of its dénouement make it both enthralling and surprising.
View the book on amazon The Secret Scripture

Posted by philipspires at 4:17 PM No comments:

The Book Of Illusions by Paul Auster 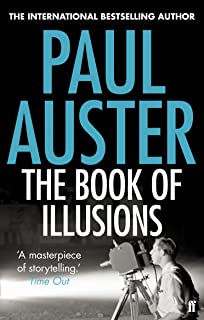 Paul Auster’s The Book Of Illusions offers the reader pretty much what the title promises. It’s a book and there are illusions! By the time we arrive at the end of the tale, however, we perhaps see the two terms as synonyms. Throughout, reality changes to fiction, fantasy becomes fact. An academic’s study of an actor’s comedy leads to an intimate involvement with the subject’s life. That life has itself become a fiction, lived with a declared aim of producing films that no-one will see. In the films, fantasies are enacted which later become real, and by design, thus rendering the original merely rehearsal. Meanwhile, the academic translates a biography so long it seems a lifetime’s work is needed to recreate it afresh.
But who knows what in that memoir might be invention, mere illusion? Hector Mann is a silent movie star. He has an enigmatic style that was never fully exploited in the industry because of interpersonal relationship problems with others in his studio. He would never have made it in talkies anyway because of a thick immigrant’s accent. I have just used a relative term as if it were an absolute. I meant, of course, that Hector Mann was an immigrant to the United States. Hector Mann, incidentally, is also Hector Spelling, amongst others.
Professor Zimmer, a recent victim of family loss via the indisputable finality of an air crash has spent much effort researching the life and career of Hector Mann. He has written a book on the star’s silent movies. The comedy, it seems, is all in the slight movement of the hairline moustache, the actor’s trademark. But there was much more, such as innovation, poetry and inner meaning within Hector Mann’s characters and plots. One day, Professor Zimmer’s wife and kids are no more and, decades earlier, Hector’s tenuous working relationships dissolve to nil via conflict. The learned professor descends into booze and an apparently interminable translation of Chateaubriand’s history. Hector leaves film and wanders elsewhere, soon to make a living out of live pornography. It’s a role he was born for, but his true identity, at least the one he has publicly shared, once discovered, becomes his downfall. He runs away from the revelation of his self.
In the middle of a mid-West backwater, a place out of which Hector created a fiction only later to render it real, an act of heroism brings a couple together. They gel. But the resulting arrangement is complex. An inheritance facilitates a totally private exploration of personal interest and thus imprisoned talent. New films are made, but they are never aired. They are different, even revolutionary, but no-one ever sees them because Hector and his new partner have opted for remote obscurity. Professor Zimmer, having assumed that Hector had died, finds out that he is still alive. There’s a chance that his book is incomplete. Another relationship gels when Alma, the daughter of one of Hector’s collaborators, visits the professor to share a project. Together they travel to New Mexico, where Hector lies close to death.
There they discover a life’s work that might change the history of cinema, but it’s a life’s work that was created for purely private purposes and carrying its own death warrant. In The Book Of Illusions, Paul Auster seems to juxtapose a reality that seems less than real with fiction that feels immediate. It’s a blurring of experience and invention, with only one reality, itself unreal, definitive. It’s a superb book, brilliantly constructed, utterly credible, but constantly surprising. The characters’ lives turn in circles. They seem only in part control and yet they always retain the option of decision. Their creativity produces a string of illusion, much of it quite real or destined to become so. And be under no illusion, the amount of destiny that we control could depend on how ruthlessly we pursue it.
View the book on amazon The Book of Illusions

Posted by philipspires at 8:25 AM No comments: