The Leningrad Symphony – a personal interpretation of the Symphony No.7 Op.60 Dmitri Shostakovich 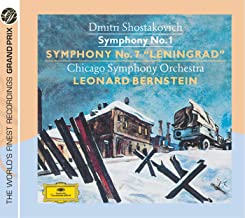 Like much music of quality, the Seventh Symphony of Dmitri Shostakovich, the Leningrad, is either loved or hated, rather than tolerated. It is famous, or infamous, depending on your point of view, for its first movement, a unique statement in the history of music, a movement lasting just under half of the symphony’s massive eighty minutes. It is also music, I believe, that is uniquely misunderstood, the popular interpretation being far too naïve an analysis of the motives of a composer as unpredictably and alternatively complex and trite as Shostakovich. So this is my personal version. First the description. I apologise if you already know the piece.

The piece opens with a confident, harmonically complex theme which seems to pass from one place to another, from one orchestral section to another like question, answer and analysis. It seems to portray life lived ordinarily, but tangibly celebrating the sophistication and tolerance of negotiated social contact. There is conflict here, but resolution is at hand through thought, interaction and experience. The music seems to offer a sense of life lived in the unending complexity of community.

But then the movement’s often derided second section begins. Over the “bolero-like” insistence of a repeated drum rhythm, an apparently innocuous, vaguely brainless, almost pop music joke theme strikes up, quietly at first, almost as if apologising for its own banality. The theme is repeated alongside an associated answering and balancing motif from the same mould. But it keeps getting louder and more assertive until eventually it transforms into a menacing presence that threatens violence. At its climax, the theme becomes a series of explosions which obviously refer to conflict and war. The complex theme of the opening returns to compete and the music fights out an exhausted resolution where the original sophisticated theme triumphs, but in an exhausted, empty way whilst the trite naivety of the drum rhythm reminds us that banality is not completely defeated.

The movement is often presented as entirely programmatic, as if it were film music. The complex themes at the start are the good people of Leningrad going about their daily lives, hence the sense of sophistication, an interpretation arising from a singularly patriotic interpretation of the work. The repeated intensity of the pop-like trivial tune is often described as the advancing German army. It begins quietly because it’s in the distance and gets louder as it approaches. On its arrival in Leningrad conflict is inevitable and, yes, the good people of Leningrad prevail, but achieve only an exhausted victory from which they can never recreate their original sophistication.

Now I have a problem with this view of the work, largely because, if it is accepted, the other movements make little sense. It is true that Shostakovich might have originally composed the first movement as a free-standing work and only added the other movements as an afterthought. It is also true that he himself summarised the symphony’s movements as War, Recollection, My Homeland and Victory, but I think that, as ever, the constraints that Stalinism placed on opinion rendered the composer more reticent than he might have chosen to be. I do think that the Leningrad’s first movement is programmatic, but I contend that its subject matter is ideology and that its intention could even be essentially propagandist, rather than patriotic. The fact that it does not believe its own propaganda, or indeed slants it in a way that might have caused displeasure to officialdom is the crucial element in my argument, because then the other three movements become nothing less than essential as attempts to answer the charges, to answer the questions.

Yes, the harmonic complexity of the opening theme must remain a depiction of the happy, sophisticated citizens of Leningrad going about their negotiated lives. But it’s a picture of the social interaction, an idealised socialism. It’s a portrait of what happy, democratised Soviets ought to be. The naïve repeated theme that follows is no German army, however. It is a musical depiction of the very concept of fascism. As with Nazism, itself, it begins small, almost unnoticed, its voice hardly heard. It is almost self-deprecatory in recognising the stupidity, the utter inanity of its own content, thus reflecting concepts such as nationalism, racism and other essential elements of such no-brain politics. But what can you do with a stupid message except repeat it? You can’t develop something that begins inane and stays that way. But you can repeat it and hope that it attracts the intellectually like-minded, the idiot, who will espouse its brainless simplicity because of the ease with which something without either content or rigour can be believed. And voices of support are added, slowly at first, but added nevertheless, and that’s why everything gets louder. And it doesn’t change because, having neither debate nor sophistication, it can’t change. It just asserts its own nonsense and inanity more forcefully. But now it is dangerous, largely because it has mobilised support amongst those who want to follow it blindly. So the repeated theme is the ideology of fascism and its triumph is the overbearing assertion of its own crassness. Its graduation to assertion beyond its own borders and thus to conflict is inevitable.

But in the end, of course, it fails, because once motivated the democratic, sophisticated, analytical ideology of the Soviet citizens of Leningrad will prevail. So the entire movement is an ideological conflict between fascism and Soviet socialism, with the latter, albeit exhausted, eventually victorious, despite the nagging continued presence of the former at the end of the movement. So that’s that. Or is it?

It is my suggestion that Dmitri Shostakovich did not believe this, at least on Tuesdays and Thursdays. That’s why we need the other three movements. The second is thematically related to the opening of the first, but the music is almost exhausted, bereft of the sophisticated energy of the beginning. Is this where we finished after the “war”, or in fact was it a different view of where we started – not so confident, not so sophisticated, just worn down? If so, then this movement is a different way of looking at the ideological propaganda of the first movement, for propaganda was what it was.

The third movement is again thematically related, but everything is slowed down. The sonorities are those of the Russian Orthodox Church in places. Its obvious nostalgia again harks back to a state and time where we idealised our past, but where that past might even have attained the ideal. We are separated from it now, and its utopia can only be imagined or perhaps worshipped.

The fourth movement now becomes the ideological key to the entire work. Yes, it is triumphant. Yes, it asserts and reaffirms an ultimate victory, but its climaxes are grand rather than heartfelt. It finds its expression via the musical platitudes that Shostakovich made his hallmark. So, yes, we have prevailed. Yes, we have also won. We have defeated the ideology of fascism manifest as enemy, as depicted in the propaganda of the first movement. But what we have achieved is neither the sophistication we claimed at the outset nor its idealised memory from some imagined past. The opening theme is there at the end, but it has lost all confidence in itself. There is a hollowness about the success, a questioning about which side of the overall ideological conflict actually prevailed. So when the great patriotic symphony that in some estimations celebrates victory in the Great Patriotic War ends triumphantly, it is not just exhausted but also disillusioned because the naivety of the outcome bears considerable resemblance to what we originally opposed. Now that’s sophisticated.
Posted by philipspires at 2:01 PM