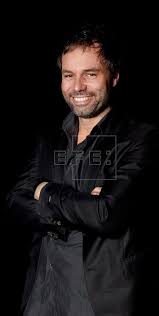 To live in a Mediterranean climate with year-round access to the sea, good food and wine, plus magnificent scenery would be enough. To have access to three symphony orchestra venues within ten kilometres of the front door is a priceless bonus. The Palau in Altea is long established, whilst the Auditori Mediterrania in La Nucia is entering its second year. But this week we have the inaugural concert series of the Teatre Auditori de La Vila Joiosa, in whose steeply-raked, red, black and white surroundings the Jeunesses Musicales World Orchestra played last night, 9 January 2008.

Under their supremely gifted director, Josep Vicent, the orchestra, resident in Communidad Valenciana since 2005, offered five twentieth century orchestral works. As ever, the programme was beautifully and expertly played by this excellent band and, once again, Josep Vicent’s choice of content was outstanding, his conducting masterful.

The evening began with Short Ride on a Fast Machine by John Adams. It is a miniature concerto for orchestra, played against an insistent percussion beat. For me the piece is a parody, an update of Arthur Honnegger’s Pacific 231, a piece with which it shares significant structural similarities. In the 1920s, the cutting edge of Honnegger’s musical depiction of speed was the railway engine. For John Adams in the 1980s it was a motorbike. It is uncanny how both pieces change rhythm half way through, both restating their pulse through the low brass of tuba and trombone. Adams’s motorcycle is less heavily engineered than Honnegger’s railway engine, however, and is definitely a lot quicker off the mark.

Josep Vicent’s second choice was Ravel’s La Valse, a piece I find thoroughly surreal. In theory, it’s an extended waltz for orchestra, but in places the music and its dance rhythms are so stretched and pulled out of shape as to render the effect brooding, even threatening. When the waltz theme emerges relatively intact, it seems super-real, almost over-stated and thus incongruous. Ravel’s masterly orchestration provides surprises and arresting juxtapositions of sonority. The Jeunesses Musicales World Orchestra was able to show off its admirable ensemble and individual virtuosity throughout this strange, strange piece.

The concert’s first half concluded with a performance of Ravel’s G major piano concerto, with Canaries-born Iván Martin as soloist. I would dearly love to write more of the orchestra’s superb playing of this deceptive piece, but not to give complete prominence to Iván Martin‘s playing would be criminal. He made the solo part sound effortless, kept a wonderful pace and was perfection indeed across the rhythmic syncopations. But he was especially convincing in the slow movement, when the piano plays throughout. It all sounds deceptively simple, and too often the movement is presented as sentimental or comes across as a platitude. Not so in this performance, when it was sincere, elegant, dignified and not a little noble. Again Ravel is deceptive, offering polyrhythms and occasional conflicts of keys within an overall impression of lightness and jazz.

Pursuing what was now emerging as a theme, the second half began with another work that presented popular idiom in a challenging way. This time it was Leonard Bernstein’s Symphonic Dances from West Side Story. The Jeunesses Musicales World Orchestra grew to gargantuan size for this piece, with a veritable battery of percussion, plus obligato finger snapping. But the piece is tough beyond the imagination of a listener who knows only the musical’s famous tunes. It’s a real orchestral tour de force and was a triumph of the player’s virtuosity.

The evening’s final piece was again a virtuosic, tough-edged celebration of popular idiom. Manuel de Falla’s suite from his ballet, The Three Cornered Hat, owes much to the flamenco of his native Andalusia. It has many spectacular moments where the music speeds and slows with the bravura of a macho showman dancer. And so the concert moved accelerando towards its thunderous conclusion, a racket matched only by the enthusiasm of the applause. And, by the way, the area is likely to have another concert hall in a year or so. Plus, if you missed the concert in La Vila, it’s repeated next week in La Nucia. I shall be attending for a repeat performance. Artistry of this quality cannot be missed.

Posted by philipspires at 2:00 PM