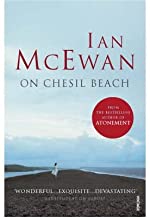 The fly cover of On Chesil Beach by Ian McEwan describes the book as “a short novel of remarkable depth by a writer at the height of his powers”. On Chesil Beach was recently short-listed for the Man Booker Prize, but lost out to Anne Enright’s The Gathering. I have read both books and, for me at least, what is so amazing is the mere fact that two such utterly different concepts could have been considered for the same prize. It is reassuringly astounding that the “genre” of literary fiction can be home to every style, every emotion, every approach, every outcome, everything imaginable and much that is real.
Those who write book blurbs are often prone to hyperbole. The greatest, the best, the most, the biggest, the most superlative are terms of mundane commonplace. The term “best selling” is usually an empty platitude. “Real” often signifies “very”, but without the latter’s imagined meaning.
So what can we make of “a short novel of remarkable depth by a writer at the height of his powers”? In the case of On Chesil Beach this blurb is an understatement, but it is essentially accurate and justified. If I were to write a blurb for this Ian McEwan novel, I would use a single word: masterpiece. I will offer only the merest summary of the plot to provide context, because the book effectively deals with just one event, a newlywed couple’s wedding night. What happens to them is the book’s crucial point, so to reveal it would render the reading less rewarding.
Suffice it to say that Edward and Florence are newlyweds and they are in a Dorset hotel for their honeymoon. This is the early 1960s, an era when sexuality was not discussed or even approached in the manner of even half a decade later. Edward and Florence are products of their age and of their upbringing. Ian McEwan tells us much of these aspects of their characters in asides and cameos throughout the narrative.
When I reviewed the same writer’s Saturday, I described the book as time turned inside out. In that book, across the span of a single day, an entire family is presented through its past, its aspirations, its identities. On Chesil Beach accomplishes a similar feat across a smaller canvas, but in a much more concentrated form, replete with comment, detail, analysis and observation. Florence is solidly middle class, Edward less so. She is a violinist from a musical family. He likes Chuck Berry. They are deeply in love and they marry, but they remain children of their age, and there is the rationale for the book, an examination of their private ideas on how to cope with adulthood, alongside an account of the practicalities.
On Chesil Beach has limited objectives, lives mainly in the events of a single evening, but, like Saturday, turn its time inside out, so we have beautifully detailed pictures of both of the nuptials’ families. Coping, or not, is what characterised the age. On Chesil Beach is a masterpiece, beautifully conceived and executed. Do read it.
View this book on amazon On Chesil Beach

Posted by philipspires at 12:29 PM