To reveal that “he dies in the end” gives no more away about the plot of Stoner by John Williams than the revelation that “he’s born in the beginning”. Both phrases refer to Stoner, William Stoner, principal character of the book that’s named after him. Perhaps it might be more accurate to refer to Stoner as just the principal, because it could also be argued that Stoner himself really did not have much of a character.


Born in 1981, John Williams, the author, tells us, William Stoner was brought up on a Missouri farm and then went to college to study agriculture at the age of nineteen. A Damascus moment in a literature class soon provoked a change of course and thus Stoner left agriculture behind to plough a literary furrow. A true mid-West lad, Stoner stayed local for his studies. He completed his degree and then a doctorate before academe beckoned, and he began a career in the same University of Missouri where he had himself studied.


Thus Stoner became a teacher. He also became a husband, a husband of sorts to Edith, who tried to persuade herself from the start that she knew what she wanted from life. He also became a father, despite the ever present difficulties in the marriage. Problems mounted elsewhere as well, and relations with students were sometimes tense, while colleagues also often became sites of conflict. Grace, his daughter, grew up whatever way she could, given her father’s apparently limitless devotion to his work and her mother’s undeniable dedication to herself. Stoner’s interactions with fellow teachers, departmental chairs and deans went this way and that, and varied relations with students happened both inside and outside the classroom.


Great events of twentieth century history passed by William Stoner. A First World War was fought. Friends went and did not return. One loss in particular remained at the forefront of Stoner’s thoughts. Denied his own life, the memory of this lost friend regularly returns to Stoner’s thoughts whenever he needs a reminder that life could have dealt him a worse hand. And then the great crash came along to ruin lives and opportunity, especially for the family of Edith, Stoner’s wife. And then, just when you might least expect it, another war comes along. Conveniently for Stoner, this new conflict begins when he is already too old to participate. But rest assured, he knew some of the casualties.


The core of Stoner the novel is the portrayal of a life, the professional and the less so, in a university department. This is mister ordinary writ small. There are feuds, friendships, words of advice whispered towards ears, and simple, blazing rows that bow people apart. No-one, we must hasten to add, is ever killed in these battles, no guns are drawn, let alone fired, and there is no blood letting, except figuratively. But it can be seen that the injured are legion.


If all this sounds rather glib, then it might just be possible that this highly credible scenario does not quite live up to its celebrity backdrop. Yes, Stoner is born at the start and dies at the end. The life in between ought to be the meat, the real guts of this story. But strangely, it isn’t. For all Stoner’s obvious commitment, patience and integrity, he rarely seems to be a participant even in his own life. Things happen to him, and around him, but yet he seems strangely passive, unwilling to express opinion, commit himself or take sides. By the tale’s end, history has come and gone, characters have impinged upon this life, left their mark and gone their own way, and students have grown up to live lives of their own. And throughout William Stoner seems curiously inert, lacking in opinion, unable to influence the impressions that others make on his life. As a character, he seems to be little more than a vehicle through which others’ foibles can be experienced. In the same way that Forrest Gump in film enacts history apparently without reflection, William Stoner sees his friends and colleagues take what the twentieth century can throw at them, but without really participating himself.


Perhaps this is John Williams’s point. In film, Forrest Gump is the embodiment of Middle America, the faithful, uncritical, trusting majority that suffers the consequences, picks up the pieces, makes the best of things, and always puts the wheel back on the wagon. Perhaps William Stoner is similarly an allegory to depict the respectability and value of the suffering Job. There are surely many others who have lived out such plots, such as anyone invented by Anne Tyler, or Saul Bellow’s Herzog. But William Stoner’s determination to remain the third person recipient of his author’s God-like view on his life is truly worthy since, if William Stoner really did have control over his own voice, he would surely have demanded just a little more of the action.
A Search For Donald Cottee is a Quixote parody
Posted by philipspires at 3:31 PM No comments:

The Deposition of Father McGreevy by Brian O’Doherty 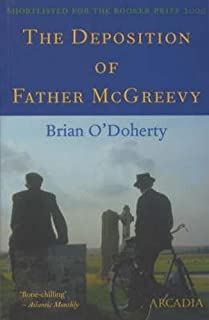 In The Deposition of Father McGreevy Brian O’Doherty transports us into a world and culture that will be quite alien to most readers. By the book’s end, we may even be convinced that this might be a different universe.


But Brian O’Doherty’s book is set in Ireland, not some distant, fanciful galaxy. It’s the west of Ireland, County Kerry to be precise, where there is a remote community on a mountain side. A harsh winter has brought sickness and, in this small place, all the women have died. It’s a momentous calamity, rendered all the more devastating by the community’s inability to bury the corpses, because the earth is too frozen to break. The local priest, Father McGreevy, takes up his pen to describe the plight of his parishioners, as they struggle to come to terms with the fate that has befallen them.


Father McGreevy’s view of the world, of course, comes from a particular standpoint. He deals with sin, guilt and all the other trappings of Roman Catholicism. But he is also a man of the world, and understands much, though not all, of what makes men tick, even though women do seem to remain a tad beyond the pale. He is also aware of how the demon drink can enter a man’s soul and transform him into something he might never have wanted to be.


None of this would have come to light, however, if William McGinn, a journalist in the 1950s, had not come into the possession of Father McGreevy’s jottings. The old fellow was gone to earth himself by the time an envelope with his testimony passed into the hands of McGinn who, out of curiosity and a need to unearth a good story, tells us the priest’s tale. Footnoted to explain the more obscure allusions and references to Irish history, literature and folklore, Father McGreevy’s notes begin with the winter tragedy. What begins to unfold, however, is a decline to death of an entire community, itself a metaphor for a whole way of life.


Pestered by progress, battered by the elements and deserted by its masters, the peasant existence, that for so long had been life’s only option, was now being squeezed into the shape of an in-bred deformity. This village on a mountainside is frozen as much by time as by its winter frost. Perhaps McGreevy’s reliance on religion to seek an explanation for illness and misfortune, an approach that in the past might have united a community struck by adversity, was already itself part of the problem, part of the frostiness that hardened everything into an unyielding, unforgiving, inflexible and hostile environment.


But what we are not prepared for in this tale of degeneration and decline is how McGreevy’s tale develops. The priest bears witness to some deep sins, acts that he previously had never even imagined possible. The lad might have been a half-wit, but he had a complete body, that’s for sure. And, again for sure, the acts in question are not what you think they are. The Father’s deposition has it all, and it’s there for you and William McGinn to read. Let it be said that the local doctor, himself a metaphor for a more pragmatic and modern way of life, takes a remarkably casual, even ungodly line, when McGreevy bares his soul to describe these shocking practices.


But, as ever, as sin leads to more sin, grievous acts lead to more eve grievous consequences. And it’s only via locating some of the participants, still alive but incarcerated in mental hospitals in their decrepit old age, that McGinn forms his own version of what happened up there in the frost on that Kerry mountainside.


The Deposition of Father McGreevy is an extended poem. But it is also a deeply surprising, ever shocking tale of the desperation that almost inevitably rules a way of life. Strangely, we never really did establish what happened to all those women, the ones who died that winter. And we never really established why the ailment was so gender-specific. We do know, however, why the men might just have been the cause of the plague. Because, when left to their own devices, it may be sin and depravity that beckons, and this just might be their true nature. The Deposition of Father McGreevy is often funny, is always graphic and is continually evocative of a potentially endearing culture. But it’s not a reassuring vision of humanity.
Posted by philipspires at 3:27 PM No comments: