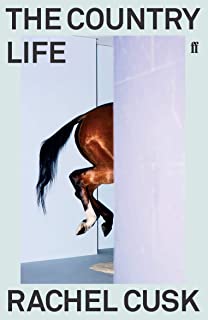 The Country Life by Rachel Cusk presents several promises, but eventually seems to break most of them. When Stella Benson, a twenty-nine-year-old, leaves home suddenly to take up a private care assistant’s job in darkest south England, it is clear that she is running away. From what we do learn later, but by then we perhaps care rather less about the circumstances.
From the start there was a problem with the book’s point of view. Stella presents a first person narrative couched in a conventional past tense. Events – albeit from the past – unfold along a linear time frame, but despite her removed perspective, she apparently never reflects beyond the present she reports. Given Stella’s character, this may be no more than an expression of her scattered immediacy, but that only becomes clear as we get to know her via her actions. This apparent contradiction of perspectives has to be ignored if the book is to work, but once overcome The Country Life is worth the effort.
Stella - to say the least – is not a very competent person. But then no-one else in this little southern village seems to have much about them. She becomes a live-in personal carer for Martin Madden, a disabled seventeen-year-old who lives with his rather dotty parents on their apparently luxurious farm. Stella has neither experience, nor presumably references, nor the pre-requisite driving licence. Her employers don’t check anything, despite their reported bad experiences in the past.
Thus Stella becomes part of a rather mad family called Madden. Stella steadily learns more about the Maddens. They have their past, both collectively and individually. Pamela, a wiry, sun-tanned matriarch, is married to Piers. They have children, all of whom seem to have inherited different mixes of the foibles on offer. There’s a local scandal or two, rumours of mis-treatment, sexual impropriety and more, but it always seems to dissolve into innuendo. This, perhaps, is the country life. Stella herself is incompetent in the extreme. She gets sunburnt - in England(!), soils her shoes with melted tar from the road, gets drunk several times, falls into the pool, gets lost, cuts up her clothing, behaves inappropriately, steals on demand and can’t find the garden gate. It’s quite a week.
As the book progresses, it seems unsure whether it should be a sit-com or a farce. But at the centre of The Country Life is Stella’s developing relationship with Martin. He is used to being the centre of attention and knows how to play the part, how to manipulate. He may, it seems, have inherited much from his mother and perhaps a lot less from his father. The Country Life is beautifully written. It is both funny and engaging. Stella’s life becomes increasingly a farce, however, and this crowds out some of the other themes that might have come more interestingly to the fore. Rachel Cusk’s writing is always fluent, perhaps overdone here and there, but when you are that good at it, a little over-egging just adds to the richness.
Posted by philipspires at 3:37 PM No comments: 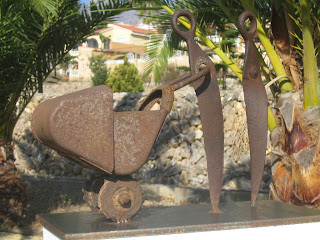 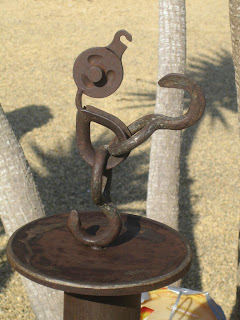 Sculpture is capable of presenting itself in a highly conceptualised manner. Shapes can be featured purely as themselves, as forms that require us to interpret, associate and eventually explain so that we might make sense or perhaps no sense of them. At the opposite end of the spectrum, sculpture can also be utterly representational, more so than in painting, since an object’s third dimension can be real, rather than realised. Occasionally a sculptor can entangle and combine these extremes and thus play with observers’ intellect as well as their vision. When the process also involved wit and invention, the mix can become compelling. Such is the experience presented by the work of Hanna Gerlind Glauner, on show until October 30 2011 in the Klein-Schreuder Sculpture Garden, Alfaz del Pi.

Hanna presents objets trouvés, bits of metal rescued from scrap yards in Spain and Germany. Dismantled, inverted or reassembled tools form the bulk of these objects, but there are carding combs, scissors, jump-lead clips and stocky marine nails as well. What is remarkable is Hanna’s vision in assembling them to form provocative, funny, tragic, moving images.

Rumpelstiltskin is dancing so hard he is coming apart. Crusaders approaching Jerusalem is close to a cartoon. A young couple out for a walk has the father pushing the pram. There is a bishop with acolytes almost hiding in his robes.

But then there’s boat people, a row of round-head clips counting themselves along the length of piece of iron that would sink. Meanwhile, four dividers stand legs apart and align their adjusters to mimic the raised rifles of Goya´s Third of May 1808.

The inventor of the wheel presents his concept. He is tall and one-legged, and so needs the wheel. A young girl is tall and elegant. Another carries water in Africa.

Thus Hanna Gerlind Glauner´s beautiful objects both amuse and provoke. Her observations possess both beauty and poise in their solidified imagination. Her exhibition in the Klein-Schreuder Sculpture Garden, Alfaz del Pi should not be missed. Full details are at http://www.klein-schreuder.com/index.htm.
Posted by philipspires at 6:53 PM No comments:

Between The Assassinations by Aravind Adiga 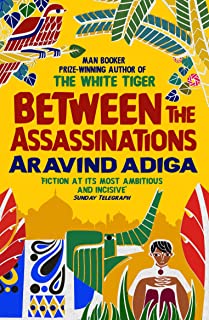 Aravind Adiga’s White Tiger won the Booker Prize and was notable for its intriguing form. I thought it would be a hard act to follow. It would need a great writer to be able to make a repeat match of both originality and style with engaging content. So on beginning Between The Assassinations I was prepared to be disappointed. I need not have worried because Aravind Adiga’s 2010 novel is perhaps a greater success than the earlier prize winner.
The novel does not have a linear plot, nor does it feature any resolution to satisfy the kind of reader that needs a story. But it does have its stories, several of them. Between The Assassinations is in fact a set of short stories, albeit related, rather than a novel. But the beauty of the form is that the book sets these different and indeed divergent tales in a single place, a fictitious town called Kittur. It’s on India’s west coast, south of Goa and north of Cochin. Kittur presents the expected mix of religion, caste and class that uniquely yet never definitively illustrate Indian society.
And by means of stories that highlight cultural, linguistic and social similarities and differences, Aravind Adiga paints a compelling and utterly vivid picture of life in the town. The observation that this amalgam both influences and in some ways determines these experiences is what makes Between The Assassinations a novel rather than a set of stories. It is the place and its culture that is the main character. The title gives the setting in time.
The book’s material thus spans the years between the assassinations of the two Ghandis, Indira and Rajiv. So it is the 1980s, and politics, business, marriage, love, loyalty, development, change and corruption all figure. Aravind Adiga’s juxtaposition of themes to be found in Kittur town and society thus leads us through times of questioning, rapid change and wealth creation. The book’s major success is that this conducted tour of recent history never once leads the reader where the reader does not willingly want to go.
The stories are vivid, the personal relationships intriguing, the settings both informative and challenging. Between The Assassinations is a remarkable achievement. The author has succeeded in writing a thoroughly serious novel with strong intellectual threads via a set of related stories that can each be enjoyed at face value, just as stories, if that is what the reader wants. Writing rarely gets as sophisticated as this or indeed as enjoyable, since humour, often rather barbed, is always close to the surface. Between The Assassinations is a wonderful achievement.
Posted by philipspires at 7:31 AM No comments:

Kansas In August by Patrick Gale 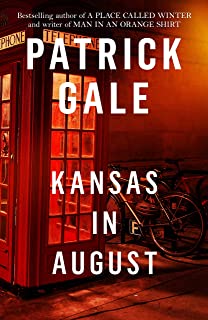 Patrick Gale´s novel Kansas In August was an interesting, if never a very engaging read. It features some rather strange people. There is a man called Hilary and a woman called Henry. They are brother and sister. They share a lover, a bisexual guy called Rufus, but neither brother nor sister is aware of the situation because certain parties have used false names. (It seems that these people always want to be someone else.
Henry is the stronger character. She is a successful medic specialising in often threatening psychiatric cases. Hilary teaches music peripatetically. Some of the children he meets might benefit from the attentions of his sister. Rufus is a partially credible amalgam of a macho man, gay pride, anything, perhaps, that he can think of today. But it is the word “think” that seems to provide the greatest challenge for these people.
They are presented as contemporary Brits rattling around west London. It is apparently always snowing. There are constant strikes and various other social challenges that result in piles of rubbish permanently half-hiding the urban decay that lines the streets. There is much alcohol consumption and occasional drug abuse, probably conceived as recreational, despite the fact that no-one ever seems to have any money. Hilary finds a baby – yes, a real baby – abandoned in a cot. He seems to think that finders can be keepers and sets about being its foster parent. He seems to be under a personal impression that he can keep his find, as if he had discovered a stray dog or a dropped wallet. He sets about occasional feeding and watering, and takes it out once in a while to provide diversion.
A young Asian girl befriends him and develops a crush. And this character, remember, we have been told is au fait with teaching, schooling and other things related to youngsters. As I mentioned earlier, “thinking” seems to challenge these people. I admit to becoming rather confused as I read Patrick Gale´s novel. I found these people quite incredible and not very likeable. I did not understand and definitely did not empathise with any of their opinions or actions. They all seemed completely self-obsessed, rather crass and, crucially, unable to imaging anything beyond the end of the nose. Even immediate reality seemed to pass them by. But then, perhaps, that is contemporary Britain, something of a dross heap of selfishness. But, given west London and snow, why “Kansas” and why “August” remain two questions that still utterly defeat me.
Posted by philipspires at 7:30 AM No comments: