A memory of Kyoto 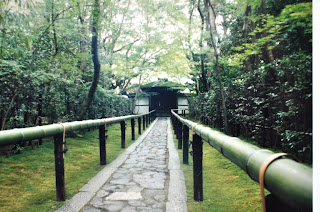 It’s often that chance encounters, the unplanned events, linger, long after the excursions and the sights of a particular trip have faded. It was in 1998 when my wife and I visited central Japan, basing ourselves in Kyoto, having availed ourselves of cheap flights from Bandar Seri Begawan, courtesy of Royal Brunei. I can place the date exactly, because it was during the early group stages of the 1998 World Cup in France. I can remember vividly watching television in a bar and seeing David Beckham being sent off in the game against Argentina. And on the evening that the Japanese team was eliminated, beaten by Croatia, it seemed that the whole nation cried. And then they all got up for work the next day as if nothing had happened, all hubris presumably having been publicly and duly dispatched.

But of course it’s the differences that the ephemeral traveller notices. We had done our research and were resolved to experience something quintessentially Japanese. An essential part of this was to stay in a traditional small hotel called a ryokan. We couldn’t manage to arrange it right away, but did manage more than a week in the place we had earmarked, which was Ryokan Yuhara, right on the canal banks at the southern end of the Philosophers’ Walk. We even managed a room at the front with a balcony, overlooking the water.

And so to some of those differences, so carefully noted and recorded. It started, and perhaps finished, with the shoes. Outside shoes were left in the foyer, each room having a designated pigeon hole in a large wooden rack, a space that holds your corridor shoes. So the rack is really a large status board for the hotel. Outside shoes in the rack means that you are in, whereas corridor shoes in the rack means you are out.

Corridor shoes are exactly what their name suggests. They are worn only in those communal areas where there’s no water. In your room, you have your room shoes, which never go out. So if you go to the toilet, you change out of your room shoes to your corridor shoes, make your way to the loo and then change into your toilet shoes.

And then you confront the toilet seat, a remarkable computerised robot that can be programmed for individual preferences. It can be heated or cooled. It plays music. It wipes itself clean after use. It plays a recording of a toilet flush to hide the actual noise your own flush makes. It probably turns you upside down, sprays you with eau de cologne and announces, “Pleased to be of service,” if you wish. No wonder you need special shoes.

And then there’s the bath. This has to be booked. There are half hour slots and, having reserved your time, you don your dressing gown and await the knock on the door. The maitre d’hotel is there, waiting to frog-march you down to the bathroom where, of course, there’s another pair of shoes. It’s a house rule that occupants of a room bathe together, by the way. Think carefully before booking this place with your granddad. A conventional shower with soap and shampoo is followed by a ten minute soak in a deep tub, the hot water being merely replenished, not replaced, between slots, so everyone shares the same water. It’s an amazing place.

But the most enduring memory of the whole trip arose from a completely unplanned event. Kyoto’s temples were quite stunning, of course, and we tried to see as many as we could, so our itinerary sometimes required starting out quite early in the morning. It also meant that we could often wander through the beautiful gardens on the way and take our time. One morning in particular we had set out very early and walked some distance in the direction of a particular temple, Sanjusagendo, famous for its ranks of hundreds of Buddhas and boddisatvas, a veritable crowd of statues, each with no less than 44 arms. So it was still quite early when we sought out breakfast in an area of the city that was new to us. Many restaurants and cafes still had their shutters down, but, after quite a trek, we found one where the door was open.

Outside there was the customary large display board. These seemed to be a common feature of all Japanese eating establishments. They carry pictures of the dishes on offer so that they can be ordered by number, a far easier process than trying to list often complicated sets of ingredients. Imagine twenty different noodle dishes, all of which have vegetables and seafood. The numbering system works. My wife and I looked at the display, noted the illustrated breakfast and went inside. The pictorial menus were a complete godsend for us, of course, since we could not read a single character of kanji.

So we sat down. There was another menu card on the table. I took it to the bar, attracted the attention of the proprietor, who was bending down to restock a fridge, pointed to the relevant picture and indicated that we wanted two of them. We lived in Brunei at the time and were not too far from home, so we thought we were used to most things Asian. We were surprised when the owner replied in English, however, with an immensely polite, “Certainly, Sir, poach, scramble or fry, and with tea or coffee?” I ordered the coffee.

While we waited for the food to appear, we wandered around the room. We were the only customers and there were several interesting photos in frames on the wall. It was clearly a well known place. A framed letter signed by the all the Canadian members of Disney on Ice expressed appreciation for the food.

The food took a bit longer than expected, but it did eventually arrive. And it was excellent. A large and tastily-dressed salad of pickled cucumber and orange was topped with three poached eggs and croutons. We ate well.

And then we had a chat with the owner, who proudly showed us some more photos. He guessed we were British, which I think was not difficult, and explained how, in the 1960s, the Queen and Duke of Edinburgh had passed along the road outside as part of an official visit. And there was the photo, with the restaurant in the frame, as the royals processed.

We were in the café for almost and hour, eating and chatting. It never crossed our minds to wonder why we were the only customers. And then I thanked our host, said we would have to move on and asked for the bill. I was immediately surprised when he said there was nothing to pay. After being lost for words, I managed to ask him why our breakfast was free and he answered, very pleasantly, “It’s because we are closed, Sir.” He pointed to the display board we had scrutinised on the way in, the one with the picture menu. It quite clearly said CLOSED in large English letters right across it. Expecting kanji, we had not seen it. He had a good laugh and wished us a pleasant sty in Kyoto.

As a tourist, it’s the differences you notice, but it’s the human similarities, the universal human values that endure.
Posted by philipspires at 4:09 PM