A review of Mukiwa by Peter Godwin 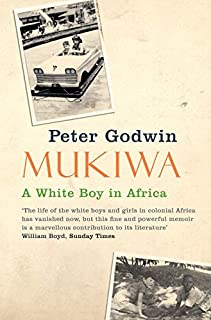 Peter Godwin certainly has a story to tell. It’s a story of an idyllic, if unusual childhood, a disrupted but eventually immensely successful education, military service and then two careers, one in law, planned but aborted, and then one in journalism, discovered almost by default. Listed like this these elements might sound just a bit mundane, perhaps not the subject of memoir. When one adds, however, the location, Rhodesia becoming Zimbabwe, the result is a deeply moving, in places deeply sad, as well as quite disturbing account of a life lived thus far. Mukiwa, by the way, is Shona for white man.
The setting for Peter Godwin’s early years was a middle class, professional and, crucially, liberal family living in eastern Rhodesia, close to the Mozambique border. I had relatives in that same area, near Umtali and Melsetter, and they used to do exactly what the Godwins did regularly which was to visit the Indian Ocean beaches near Beira. We used to get postcards from there every year, usually in the middle of our north of England winter. Envy wasn’t the word…
Peter Godwin’s mother was a doctor and this meant that his childhood was unusual in two respects. Not many youngsters in white households had liberal-minded parents and even fewer helped their mothers conduct post mortems. Unlike most mukiwa, Peter Godwin had black friends. He learned the local language and got to know the bush. He also grew up close to death and then lived alongside it during the years of the war of independence. He describes how the war simply took over everything and labels himself as a technician in its machinations. It’s a telling phrase, admitting that he did not himself want to fight anyone. Like everyone else, he was caught up in the struggle, required to actively perpetrate the violence and that is what he did.
His education was disrupted. His family life was effectively destroyed. And how he managed to keep his sanity during the period I have no idea. He served most of the period in Matebeleland alongside other members of the Rhodesian armed forces and police who were not, to say the least, as liberal as he was. So in some ways he was already doubly a foreigner in that he was working in an area where he could not speak the language and was accompanied by fellow countrymen with whom he shared no beliefs or ideals. And yet he had to fight.
I have never served in a war and hope I never will. But my relatives from the same area as Peter Godwin were also called up into national service and also fought the war. I had not seen them for fifteen years or so when we met after they, along with many thousands of others, as recorded by Peter Godwin, had already fled south. But for them also memories of war were deep and resented scars. It was a bloody and dirty war where, if you were lucky, you could at most trust your closest colleagues. It was a vicious conflict at times and left everyone angry. No-one won. Everyone suffered.
Having eventually achieved the education he sought, Peter Godwin attempted to launch a legal career. But then, almost by default, he became a reporter. After independence, he learned of atrocities perpetrated by the Zambabwean army in the area where he had served during the war. He investigated. He reported. And then, on advice, he fled.
But he did eventually return to all of the areas he knew and the last part of the book is a moving and deeply sad account of how little he recognised in the places he loved as a child. But within this, there is a moment of hope as he meets a former freedom fighter and, with humour and new friendship, the two of them realise that they had not only been enemies, but had actually been two commanders trying to kill one another on opposite sides of the same skirmish.
But in the end, Peter Godwin is changed man, and his home and homeland, at least as he had experienced them, were no more. War had changed everything and everyone. No-one won.
Posted by philipspires at 4:09 PM