Restless by William Boyd - A review by Philip Spires 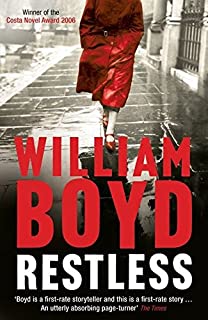 In offering a review of a novel by William Boyd I could certainly be accused of bias. I would proudly plead guilty, since I regard him as one of just four or five British writers who are capable of constructing supreme works of fiction, written in a framework that is both informative and thought-provoking and all this set within a continuum of contemporary or historical events which themselves become re-interpreted by the fiction.
In Restless, Boyd’s latest novel, he has re-stated this ability and, if anything, written it larger via a smaller form. The historical element in Restless is supplied by the activities of an offshoot of World War Two intelligence. Ostensibly a private, dis-ownable initiative of a particular group, Boyd suggests that it formed an integral part of the British strategy, during the early part of the war, to force the United States to join the Allied effort. The fact, therefore, that it was undermined and subverted so that it perhaps aimed to achieve the opposite of its brief was probably par for the course when espionage meets its freelance counter, but the denouement is surprising and wholly credible.
In front of this backdrop of fact meeting fiction, we have a landscape of human relationships. Ruth is a single mother in Oxford. She, herself, has had certain German connections, nay relations, hence the motherhood. She makes a living teaching English to foreign tutees, has several dubious visitors, dreams about completing an aging PhD and generally spends much of her time looking after a precocious five-year-old. And then her mother becomes someone quite unknown to her. The widow in the Oxfordshire retreat suddenly becomes part Russian, part English, with a French step-mother. She possessed several different identities before she became Mrs Gilmartin and most of these were fiction to provide cover for the others. How many of us, after all, can claim to have known our parents before they were parents?
So, as Mrs Gilmartin the mother reveals to her daughter via instalments of an autobiography that she is really Eva Delectorskaya, recruited in Paris to conduct a campaign of wartime disinformation in the United States, the complications of life gradually attain the status of the mundane. Recruited, perhaps, because she was rootless and thus expendable, Eva proved herself intellectually and operationally superior to her manipulative managers and survived the posting that was supposed to achieve their subverted ends and, at the same time, erase her potential to supply evidence.
Many years later, Eva, now Mrs Gilmartin, feels the need to get even, to expose the double or triple-cross for what it was and deliver at least a prod to the comfortable, self-congratulatory but traitorous British establishment that ran her. Daughter Ruth becomes the means. So one messy life tries to tie up its soggy ends via the actions of another who is apparently yet to attain the same depths of complication. And she succeeds. The fright is delivered. The memory that Eva, the mother, was fundamentally brighter than the upper class Brits who were trying to manipulate her is rekindled. Her training was perfect, but she went beyond it and the plan backfired, irrelevantly as it turned out because greater events intervened.
But years later, Eva, Mrs Gilmartin, is still brighter than her boss and, through her daughter’s efforts, she brings a special kind of justice to bear on the double-dealer who ruined, but also perhaps made her life. In characteristically humble terms, William Boyd reminds us at the end that we are all watched, all awaiting the cupboard to reveal its skeleton, but in our more mundane lives, it is unlikely to be as colourful an event as that which Eva Delectorskaya, Mrs Gilmartin, and her daughter Ruth uncover. View this book on amazon Restless

Posted by philipspires at 12:49 PM