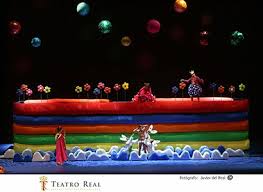 Just occasionally – in fact pretty rarely these days – something utterly surprising emerges from an evening in a concert hall. Almost forty years into an interest in music which has focused on every style of western music from Gothic to minimalism (perhaps not such a great leap!), real surprises are now quite rare and often come about on hearing a work by a young composer, someone just starting to seek a voice. But Xavier Montsalvatge died aged ninety in 2002 after a lifetime longer than most as an active composer, but few outside his native Catalunya were then familiar with his music. Since moving to Spain I have actively sought programmes that featured his increasingly popular output and have been impressed with the eclecticism of his style, usually neo-classical, but often laced with popular tunes, folk song and jazz, and sometimes even giving more than a hint of Bartokian toughness. But nothing from the piano works and pieces for strings I have heard up to now could have prepared me for the experience that was Montsalvatge’s opera, El Gato con Botas, Puss in Boots.

Obviously an opera for children and with a text by Charles Perrault which faithfully follows the familiar pantomime version of the tale, we know from the first rhythmic string figures, with their shifting harmonies and ambiguous keys, that we are to experience a work which exists simultaneously on different levels, similar in some ways to Janacek’s Cunning Little Vixen, but lighter in its touch, a Miro to Janacek’s Dadd.

The work lasts just an hour and has five scenes. In the first our Puss is lazing on a cushion in front of the television, occasionally offering her skin-tight costume with its hanging baubles in languorous lines to the audience. The children were captivated from first to last, mesmerised by this wonderful engaging character, elegantly and excitingly portrayed and sung by Marisa Martins. Older members of the audience might have had other things in mind, such is the nature of pantomime. It is in this first scene that her new sequinned, high heeled and pointed boots are presented, along with a cloak to emphasise her pinkness. The king and princess lament the state of the kingdom. Apparently it’s a boring life when there are no wars or civil strife. Neither are there husbands, it seems. Puss with boots appears and is hired. The miller, a suitor for the king’s daughter, strips to his shorts and takes a swim in the river and immediately gets into difficulty. Puss summons her trusty white rabbits who, until now have balletically moved props and rearranged the kindergarten’s alphabetic furniture. They don snorkels and goggles and rescue the lad. The king is overjoyed and the princess’s eyes are seen to bulge a little. And then the ogre appears to rough things up a bit. In his lair, he laments the fact that the high life might have rendered his nose the colour of an aubergine. Puss sorts everything out, of course, whimsically avoiding the lion into which he transforms himself, then wooing the canary which is his next trick and finally, of course, dealing (offstage) with the radio-controlled orange mouse which was the form she requested him to take. Are all ogres that stupid? Anyway there’s a wedding and clearly all live happily ever after, including Puss who gets her television back.

So that’s the story. It’s pantomime, but it is superbly done and it’s filled with wonderful imagery. Marisa Martins as the Puss is quite outstanding in the role. She has a dancer’s use of the body alongside coquettish expressions and interpretive gestures which seem to draw the music rather than follow it. And she also has that unmistakable talent to sing beautifully and act apparently effortlessly at the same time. Enric Martinez-Castignani as the king gives an excellent portrayal of a bumbling idiot whose deafness perhaps hides his wisdom. Miguel Zapater as the ogre is outstanding. He becomes a real pantomime character who admits he has had a few too many glasses of wine. Maria Luz Matrinez as the princess carries off the apparent naiveté of the character with aplomb and her voice shines in a role that has to bear the sledgehammer imagery of a wedding dress of pure white hung with bright red balls. How’s that for subtlety! And if David Menendez had stripped down to his swimming trunks to take his dip in the river in an older-style opera house, no doubt a section of the audience would have called for a diversion of the glasses otherwise permanently trained on Pussy’s pinkness. His playing of the role was a superb blend of clown and suitor and his singing was excellent.

But underpinning all of this was the music, which was brilliantly expressive, a deceptively simple yet eclectic mix of recitative, full orchestra and inventive ensembles. The trombone and tuba figures that accompanied the ogre were a touch of genius. The recitatives were superbly cast as not quite Mozartian, whilst the neo-classicism was always delving into interesting harmonic shifts. And there was always the hint of a cat’s paw flick in the strings to allow Puss to draw us all in with that playful flick of the hand and wrist. In the pit the World Youth Orchestra played flawlessly and Josep Vincent, who is surely one of the brightest and most accomplished of young conductors, is surely destined for global recognition.

This was music and performance of the very highest standard – and all happening in this increasingly sophisticated little town of La Nucia, just outside Benidorm. What a wonderful place to live!

Posted by philipspires at 1:00 PM