A Silk Road Trip, or I Gobbed in the Gobi, China,1992, by Philip Spires 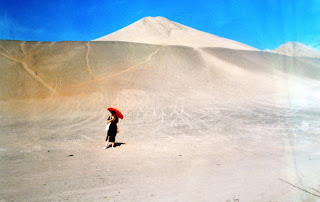 In August 1992, myself and my wife, Caroline, arranged a trip to post-Tiananmen China. It was in the days when the London China Travel office was on Cambridge Circus, opposite the Palace Theatre on Charing Cross Road. It took me at least twenty books, a late-night Japanese television series and several months to plan and arrange the trip from what was then our base in Balham, south London. In those days, you could arrange the visit via China Travel and then, as long as the itinerary was lodged in advance, you could travel absolutely independently. Everything was pre-paid, but on setting off, we had no tickets or confirmed reservations apart from our air tickets in and out of Beijing. As ever, I kept a journal of the trip, which ran to more than fifty pages. A few years later, I condensed the experience to two sides of A4, ignoring rules of grammar and syntax, and produced the following ramble, a perhaps poetic impression of nearly a month of travel.

Ex-London while the Sun dissected Michael Jackson's nose and praised Boardman's hooterless gold-medal bicycle. Air China to Beijing, where taxis cost more than Lonely Planet predicts. A Chinese character itinerary from one Tim Han of China Travel whilst fellow workers drool over televised lithe Afro-American sprinters at the Olympics. Then to the no-longer Forbidden City. Piles of local tourists to negotiate.

Woman losing her gold watch at an illegal 'find the lady'. Policeman looking on. Tears when the loss hits home. Renmin Park for noodles and rocket-fuel chili sauce. Bag slashers with finger-ring knives on a crowded bus. Care needed.

Cave day. Mogao Buddhist caves - closed from 12 to 2, full day needed for perhaps the most stunning sight on earth. 400 'caves' (some cathedral size) in a sandstone gorge, between 400 AD to 1100 AD. Utterly dry, always dark, perfectly preserved. Everything painted. Tang period complex and colourful. A world of scenes by torchlight. Buddhas reclining, sitting, standing, posing. Thirty metre seated figure with thousands of unsmoked cigarettes and coins on his lap as offerings. Shock of Qing-renovated cave with Taoist figures. Ghoulish features, contorted, and a face in the groin. 40 caves seen in the day, archaeologist as a personal guide. Stunning. Fourteen dishes for dinner.

Terra cotta warriors facing east to guard Qin Shihuang's tomb. Made in pieces. Assembled in situ. Partly excavated section where piles of dismembered limbs emerge from the earth. New terra cotta warriors for sale from the factory behind the museum. Exact replicas of originals. Wheeze at the thought of the whole thing as a sham for the tourist trade.