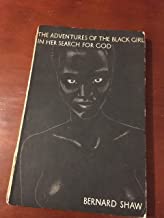 The title piece in this anthology is a parable on the nature of religious belief. When first published in 1932 it caused quite a stir and I wondered whether the intervening 75 years might have rendered it something less of a shocker. I found that, apart from one violation of current political correctness and a few inevitable stylistic issues, the message had lost none of its poignancy and perhaps little of its ability to shock.
The Black Girl in Search of God is not a novel or a novella. It is not really a short story either. I choose to describe it as a parable because others have, but equally it could be classed alongside Plato’s symposium as a vehicle for examining a philosophical idea. It’s not a discourse, but it could be a meditation, albeit a rather energetic one. The idea in question, of course, is the nature of religious belief.
The Black Girl of the title is only cast as such, I think, to provide Shaw with a literary vehicle to convey his otherwise naïve questions about Christianity. To this end, The Black Girl is presented as a “noble savage”, and thus a tabula rasa. It is here – and only here – that Shaw violates current correctness. The character could have been cast as a child, but then she could not have threatened to wield her knobkerrie, her weapon, and nor could she have been portrayed as bringing no tradition of her own. We must accept, therefore, that there remains a functionality about the role of this character. She does not represent anything, except her ability to ask the questions she is required to ask.
The Black Girl has been converted to Christianity by a young British woman who has taken delight in amorously jilting a series of vicars. She then becomes a missionary, despite her clearly thin grasp of the subject matter. She is, perhaps, an allegory of colonial expansion. She goes abroad to teach others despite not having achieved fulfilment or knowledge in her own life. It might be important that the teacher and the taught are both women.
When her convert starts asking questions, fundamental questions that the missionary herself has never heard asked, never mind answered, she reverts to invention, not scholarship. Shaw’s intention is clear. She invents myth to mystify myth. And this cloak satisfies the curiosity of the average Christian, but not The Black Girl, who thus goes off in search of God.
And, guided by snakes, she finds Him. And not just once, because there is more than one God in the Bible she carries. There is the God of Wrath, who demands the sacrifice of her child. When she cannot comply, He demands she find her father so he can sacrifice her. A good part of the Bible thus disappears from her new-found faith.
She meets an apparent God of Love, but he laughs at Job for being so naively and blindly devout. More of her book blows away.
She meets prophets who, one by one, deliver their different messages, most of which conflict and communicate individual political positions or bigotry rather than personal revelation.
On the way she belittles Imperial power and male domination. She learns that most “civilised” countries have given up on God and hears a plea that people like her should not be taught things that the mother country no longer believes.
Scientists offer her equally conflicting opinions. They are careful only to describe, never to conclude or interpret. In a way, they are just modern prophets, each with their own interested positions.
There is an amazing episode where a mathematician implores her to consider complex numbers, the square root of minus x, which The Black Girl hears as Myna sex or perhaps its homophone minor sex, and is clearly a reference to feminism. Along with economic power and male dominance, The Black Girl sees guns as the highest achievement of white society. This anticipates the description of colonialism’s trinity in Ngugi’s Petals of Blood.
Then, in a strange section, an Arab discusses belief with a conjuror. These appear to be a pair of major prophets in thin disguise. But their discussions merely confuse the girl and their words skirt her questions.
And so she meets an Irishman, marries and settles down. She devotes herself to him, their coffee-coloured children and the fruits of their garden. Note that she does not devote herself to herself. She projects out, does not analyse within. And in this utterly humanist universe she finds not only personal happiness, but also fulfilment and, with that, answers to her own metaphysical questions that religion per se could not even address.
And so, as the parable closes, we ponder whether the Irishman she marries is Shaw, and whether The Black Girl is the questioning, non-racist, non-sexist, socialist and humanist vision of the future he has personally espoused.
And as for the Lesser Tales, they are generally lesser. Don Giovanni explaining himself was fun and the Death of an Old Revolutionary Hero was prescient of the role of the Socialist Workers’ Party adopted in maintaining Margaret Thatcher in power in the 1980s. A great, historical and fundamentally contemporary read.
Posted by philipspires at 9:46 AM