Up and Down in Toledo, the expected and the surprising 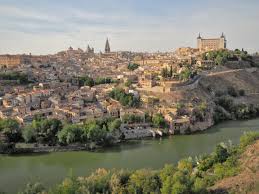 I have wanted to visit Toledo for at least forty years and for one particular reason, being the canvases of Domenicos Theotokopoulos, or El Greco as we have learned to call him. Well, now I have been and I found what I sought, plus a truly amazing and unexpected surprise.

Toledo is one of those celebrity tourist destinations that defy categorization. It was a trading centre in Roman times. It was the Visigoth’s capital in what we still call the Dark Ages. It became a splendid, rich, cosmopolitan, multi-faith trading city and artistic centre under Muslim rule. The Christian era saw the construction and decoration of the institutions and monuments that now comprise the city’s current iconic identity. And, after the period of relative decline that affected all of Spain, it is now one of the world’s most visited tourist venues whilst retaining its own, highly dignified life.

Its setting is superb. Almost surrounded by the Rio Tajo, the outcrop towers over the gorge. And it is topped by a mass of buildings, each of which seems to state its own competitive claim to grandeur. Few of them can challenge the sheer scale of either the Alcazar or the cathedral. The former is much reconstructed and rebuilt after being fought over many times, but its vast scale alone impresses, and surely, courtesy of El Greco’s painted cityscapes, is one of the most recognizable buildings one earth. The cathedral, on the other hand, is both monumental and aesthetically pleasing. Its pictures include El Greco portraits of the saints and an amazing, near cubist Madonna by Morales. One chapel has portraits of all the archbishops who have reigned there. The treasury has five hundred years of their robes. And the ambulatory behind the altar has some of their cardinal’s hats hanging from the ceiling. Apparently they are hung over the owner’s tombs and remain there until they rot. The hats, that is.

There’s an interesting point to be made about a visit to one of the town’s smaller buildings, the Synagogue of Santa Maria la Blanca. The period of Muslim rule was marked by great tolerance. Though the different religious communities had their own areas of the city, Christians, Jews and Muslims built their own churches, synagogues and mosques. But after the re-conquest, Christianity asserted its dominant and normative creed and everything except the churches was suppressed. So the synagogue became a church. An altarpiece was erected in front of the holy wall and arches were bricked up so that Christian paintings could be added. And since the Christians actually did not believe that Jews and Muslims had actually converted, a Holy Inquisition was established was established to identify dissenters. It was not long after this turbulent period that el Greco arrived in Toledo.

Domenicos Theotokopoulos left Crete to train as an artist in Venice. By 1577 he had settled in Toledo and there he stayed. His unique style, a blend of high Renaissance, Orthodox Church iconography and emerging Mannerism is both instantly recognizable and supremely expressive. His use of light - or often lack of it, since he often painted in the dark – gives his canvases a strangely ethereal whiteness which so often seems to stress the humanity and therefore vulnerability of his subjects.

El Greco’s work, of course, is represented in major collections throughout the world and, it could be argued, the collection in the Prado far exceeds in importance and sensation what remains in Toledo. But in the city’s San Tomé church, still in the place for which it was conceived, is the painter’s masterpiece, the Burial of Señor Orgaz. It’s so well known that the experience of standing before it might provoke déjà vu or anti-climax but, like all true masterpieces, it transcends even its own reputation by offering much more than its expectation. Painted in 1586, it depicts the interment of a medieval knight, a resident of Toledo, philanthropist and benefactor of the Sane Tomé church. In the foreground, Señor Orgaz’s body is laid to rest. Meanwhile, towards the top, his soul is admitted to heaven. Across the entire width of the picture a line of mourners faces serves to separate the worldly lower half from the heavens above. Each person is a unique individual, each offering a different emotional and perhaps political response to the burial. In the swirling heavens above, human gravity has no place. There, everything glows with a cool white light, perhaps suggesting cascades of water rather than flights of passion. And it’s the row of human heads, with their intellects perhaps combined, that forms the boundary between the material world below and the ethereal heavens above. A true Renaissance message.

There are other El Greco originals and several copies elsewhere in the city, in Santo Domingo Antiguo, the cathedral, Santa Cruz museum and Tavera museum. Perhaps only the artist himself knows why so many of the people in his paintings have pointed noses. But if all Toledo had to offer was the Burial of Señor Orgaz it would still demand a visit.

The other venue with El Greco paintings is the Casa del Greco, but this is closed for restoration. There are a couple of very well known paintings in that collection, notably a view of the city with a map, so they have been re-housed in the nearby Victorio Macho museum.

Given my motivation for visiting Toledo, I doubt whether I would have made the Victorio Macho museum a priority. He’s a twentieth century sculptor, born in Palencia, Spain, and who spent many years in Peru. It was the El Greco paintings, re-housed there, that drew me, but I left having experienced one of those wonderful surprises that renders a particular trip not just memorable but etched in the mind, never to be forgotten. Macho’s work is astoundingly beautiful. There are bronzes, stonework and drawings. His series of self portraits is masterful, the face full of doubt, but its representation a model of expression and confident technique. A female nude from the back entitled The Guitar is memorable, to say the least. But the most stunning piece was the one a fellow visitor described as just like her grandmother. A small old woman dressed entirely in black sits alone with her head ever so slightly bowed. The head and hands are white. Her expression at first seems detached, at least contemplative, perhaps rather aloof and judgmental. But it changes. A hint of a smile appears as you study her face. And then the sculpture seems to suggest the woman’s entire life. She is simultaneously old and young, with the contrast of white flesh and black clothes suggesting youth and age. And it’s all there in that enigmatic face.

So having found in Toledo the experience I sought, an experience of a quality I had expected, the works of Victorio Macho provided the surprise which made the visit utterly memorable.
Posted by philipspires at 5:24 PM