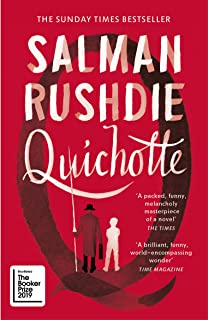 I heard an author interviewed on the radio. He described a character he had invented, a fellow called Quichotte (that’s key-shot, by the way), who himself had been invented by another character in the same book (Quichotte), who had already been invented by the author. The characters have families, each having one son, one imaginary, the other – well - imaginary, but at least in possession of a formal and formally imagined birth, the other a product of parthenogenesis.

All these people, both the real-imaginary and the imaginary-real, live in the United States, amongst other places, a country which, as places go, is regularly imagined and sometimes described. The author’s point, if it might exist in the singular, is that it was time to update the idea of Miguel de Cervantes, who four hundred years ago imagined a character called Quixote (key-ho-tay) emerging from the pages of a discarded Arabic text discovered on a rummage through a second-hand stall on Toledo’s market. That’s Toledo, Spain by the way (population 84,282, occupying 232.1 square kilometres and 89.6 square miles, if you are so inclined). Or so we are told. But he made it up, alongside the said Quixote’s (key-ho-tay’s) popular culture-driven madness that demanded he set off dressed as a film star to do good in the world. Geddit?

Quichotte proceeds in a parody of said key-ho-tay back and forth across the United States, accompanied by his real-imagined and imaginary-real playmates, old flames and the not wholly imagined but apparently unattainable beauty, Salma R, among them. They get up to some good, but predominantly they observe and relate. They relate to their relatives, who are mainly from Bombay, and to their acquaintances, who as often as not abuse them on the basis of their skin colour, which is brownish, and as a consequence accuses, nay convicts them of being terrorists, bombers, jihadists or merely general extremists before pulling their guns. This causes our characters, both real-imaginary and imaginary-real to suffer significant but mild crises of identity. More accurately, their identities would be in crisis if they could ever find them or even define what they were looking for in their continual search for said qualities. Rule one: carry a gun. Self-defence. Get the retaliation in first. Rule two: read the book.

As I sit here in my room (population one), I imagine my rather privileged position. There cannot be many reviewers of a Quixote parody who can also claim to have written one. In his search, Donald Cottee, my own imagined key-ho-tay, examines his identity and origins from the perspective of a second-hand Swift Sundance parked on a campsite in Benidorm. In his radio interview Salman Rushdie, from here on called ’the author’, talked about his own origins.

The author went to Rugby public school - for our American friends, here public means its exact opposite, private - blame the English - and sang Christian hymns with his Muslim voice at school assemblies. Also, for the Americans again, rugby with a capital R is a town (population 100,500) and should not be confused with the sport of the same name, team population 13 or 15 depending on social class, whose name is in fact often capitalised, which was first invented in the same establishment, the school, population 802, established 1567, not the town, origins debatable, but probably iron age. It has progressed.

But he and his family, the author Rushdie that is, and therefore their combined roots, were also from Bombay, if you are English or perhaps Portuguese, which most English don’t appreciate, or Mumbai if you are Indian, but there is no such language as Indian, so this term must apply to residency. But of course the author Rushdie was not resident in Mumbai-Bombay at the time, hence his presence in Rugby (public school, where public equals private) where he tried to work out where and who he was, probably while playing rugby.

And so to the United States where he is lumped together with others whose skin is tinged, coloured (not orange or red, unless you are an Indian, but that’s another story) or brown - let’s call it Black - by another broad church (C sometimes) of people, who skin is pink, red, but not Indian, or even orange – let’s call them White, who, if they live in New Jersey, need regular check-ups to ensure they have not morphed into mastodons. Geddit?

Let’s stir into this heady mix a manufacturer of opioids, fentanyl for sublingual use, just to be accurate, a terminal cancer, several close shaves involving gun owners trying to retaliate first and lots of encounters with popular culture, Holly-Bollywood and the like, and you arrive at where you have been headed all along without ever consulting a map or making a plan. And we have not yet even mentioned a Dr Smile or a Mr DuChamp. Get it? Read the book. It’s splendid. Funny. Political. Perspicacious. Now there’s a word.

Posted by philipspires at 11:43 AM