On The Yankee Station by William Boyd 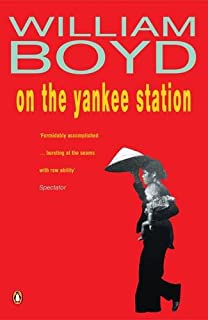 On The Yankee Station by William Boyd is a series of short stories, the longest of which provides the title for the set. This particular story is a superb piece of short fiction, much more than a short story, confronting, in less than twenty-five pages, several big issues and, at the same time, drawing its characters in considerable, complex detail. Set on an aircraft carrier in the South China Sea during the Vietnam War, it describes the antagonistic relationship between two crew members.
Pfitz is a pilot, conscious of and grateful for his perceived and actual status, a status he does not hesitate to assert to his advantage. But this tendency is sometimes exercised to excess. It is as if he needs to feel the elevation of his status in order to bolster his own self image. In short, he is a bully. This characteristic begins to dominate his thoughts and actions when events conspires to question his own competence, his right to that nourishing status.
Lydecker is a member of Pfitz’s ground crew. Suffice it to say that Lydecker is not at the intellectual end of the fighting machine. Neither does he hail from privilege. Quite the contrary, in fact. Lydecker, had he not joined the navy, would probably have grown into a complete bum, at best one step up from a down-and-out. Even in the armed forces he can only aspire to the most menial of tasks, but he is at least thorough and tries to keep his nose clean. But for Lydecker events conspire to heap suspicion on his competence, a suspicion constantly fuelled by a torrent of abuse and accusation that flows from Pfitz, the pilot it remains his responsibility to service.
Pfitz likes his job. That much is clear. He takes a particular liking to napalm and delights at the idea of heaping tons of the stuff from his jet onto the population of rural Vietnam. He takes involved interest in technical improvements to his preferred weapon, improvements that ensure the fireball sticks firmly to anything it encounters, thus guaranteeing that it will burn right through. If he were closer to the action, one feels that Pfitz would delight in the smell, the mixture of burning organics saucing the suggestion of roast pork emanating from oxidised human flesh. He takes that kind of pride in a job well done. Lydecker is demoted, effectively humiliated by the time he gets an opportunity for some shore leave.
During his week in Saigon he remorselessly pursues two forms of recreation, one out of a bottle, the other between whatever sheets are on offer. But there is one girl who is different, staying remote from the business of others, busying herself about her own affairs. She is treated with apparently universal and complete contempt and she alone amongst the bar hangers-on is never on the menu, her meat not for sale. Bullied himself in the workplace, one might expect Lydecker to sympathise with her plight. But he treats her with as much – if not more – disdain than the rest and, eventually, it is more out of spite than either sympathy or desire that he insists on a session with her, forces himself on her merely to underline his right to assert assumed control.
What Lydecker subsequently experiences with that girl changes his view of the world just a little, but enough to influence events elsewhere, his new-found conscience constructing a plan he might employ back on board. In a short story, William Boyd illustrates class systems embedded in the USA’s professedly classless society. He confronts the so-called clinical nature of modern warfare by identifying the blunderbuss of terror that maims everything in its indiscriminating line of fire. He characterises sadism, vengeance, conscience and retribution. He draws sketches of exploitation, both economic and social, and illustrates how communities, even whole societies, can be seen as built on a crass and ruthless assertion of domination for domination’s sake. And all of this happens in less than twenty-five pages. Other stories in the set are also of a very high standard. To review them all would reproduce the book, no less, for they are succinct, often surprising, sometimes humorous pieces which together form a supreme achievement.
View this book on amazon On the Yankee Station

Posted by philipspires at 1:21 PM