After These Things by Jenny Diski 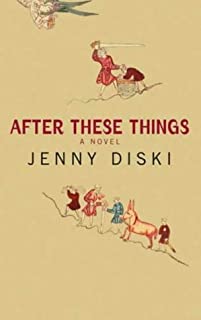 In After These things Jenny Diski accomplishes an almost impossible task. She starts with a well known story, and thus a plot ready declared, a story that claims history and yet is read as myth. She reworks it, gives shape, form and thought to characters we think we might already know, and then puts words in their mouths. She finally presents the whole as an original work, a novel of deception, love and the intricacies of family life in a culture now perceived as alien. And she succeeds brilliantly, creating a new experience in a new world for the reader within a familiarity that her approach reinterprets.
After These Things is born of the Old Testament. Abraham and Isaac, then Jacob and Esau, Rachel and Leah and finally Joseph and his half brothers, all face one another in head-to-head rivalry. There is trickery and deception, bullying and exploitation, politics and self-interest. Individual battles are fought, private wars are waged, all in the name of family. For instance, Jacob profits through his trickery, but is later himself the victim of Leah’s coup. And so within each rivalry there are characters with stratagems, strategies and aims, goals that are often justified via claims to occupying a special position in relation to God. And yet all the characters have to live with the consequences of their individual ruthlessness. Together they pursue individual goals that eventually add up to a dynastic success, but perhaps not for any of the reasons that they themselves planned.
And After These Things thus grows into a finely-drawn psychological thriller and political intrigue. Characters whose interests coincide cooperate, albeit often only pragmatically, despite their partners’ clearly stated and obvious cultural and religious differences. A tangled web of deceit, compromise, antagonism and truce eventually casts Jacob as the successful instigator of a bloodline, despite its having been constructed via four separate mothers, two of them wives and two others their maids, and all of them in conflict. He experiences true love only with the wife he does not himself love, and then refuses to countenance repeating the emotion. But she provides him with the children he needs to secure his ambition. His true love, meanwhile, does not conceive and becomes so racked with self-doubt and destructive jealousy that she can express little feeling and certainly no love for her husband.
Thus Jenny Diski achieves her own goal of creating drama out of a well-known story and thereby creates characters that are rounded, real people, their obvious humanity belying their myth. What she does not do is attempt to generate a sense or feeling of place. Though we travel with the semi-nomadic action and live alongside shepherds and specialist livestock breeders, we are never allowed to taste the foods they eat, smell the homesteads they inhabit, or walk the hills, deserts or plains with them. Jenny Diski keeps us within their minds, their motives and their fears. This is not a shortcoming of After These Things, merely an observation of a limit the author no doubt consciously placed on its scope.
After These Things is already a novel with breadth of story and depth of analysis. To have made it also a descriptive, deliberately sensory portrayal of a time and place would have been a gargantuan and ultimately self-destructive task. It would have detracted from the books focus on human relationships and also, crucially, sited the events in a particular time and place, thus undermining their continued mythical status. And when confronted with an editor who must keep pace and plot in place, it was probably a potential aspect of the book that had to give. After all, in the end there is always the Great Editor, the one true opinion that demands both first and last word. calls the tune, pays the piper and laughs last. And so via an Old Testament myth presented as history, or even vice-versa, Jenny Diski creates a thoroughly modern drama of relationships, ambitions, resentment and fulfillment. Driven people do things they feel are demanded of them both by history and identity. And everything is underpinned by an eventual morality and justice, a restatement of human failing and vulnerability. He who tricks his way to wealth is himself tricked into marriage and then, at last, by his own sons, who themselves resent the favouritism bestowed on a brother. They offer the father the son’s bloodstained coat of many colours and thus, in their own way, get their own way. Some things do not change, cannot be edited.
Posted by philipspires at 11:15 AM