The Hired Hand by Melvyn Bragg 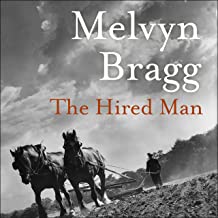 The Hired Hand by Melvyn Bragg is the story of John Tallentire, his wife, Emily, and their families. The novel is set in Cumbria in the north-west of England, starting in the 1890s and following the characters’ fortunes until the 1920s.

John Tallentire is the hired man. He is a farm labourer who does as he is asked but is rewarded with mere subsistence. He accepts his lot. But then, in an attempt to improve his life, he becomes a coal miner in pits where the workings stretch out under the sea. The First World War comes, and goes, but not without wreaking its own dose of havoc on the family. John lives through attempts at trade union formation. And there is an accident in the coal mine that traps several miners.

And so John’s life unfolds, working its way towards a goal one feels that he never chose. He is a hired man, a seller of labour in a market that, by definition, undervalues what he does. It is his lot to respond to the demands and commands of others. His own preferences, his own motivation must always be kept firmly of secondary importance because, as a hired man, he has no resources to apply to his own ends until he has satisfied the demands of others. And, inevitably, those demands are as great as his willingness to fulfil them. Consequently, the rewards of his labours are never enough to raise his life above satisfying the needs of today.

Emily, his wife, lives a dutiful life alongside him. They marry with their lives ahead of them and Emily makes do, happily, with her lot. The children come – and go, since not all of them survive. Neither do the surviving children seem to have much of a chance of their own to break out of the dependency that is their life. The subtlety of The Hired Man, however, is that this continued dependency is cast in a society that is subject to constant change. It is not tradition, or shackles of rigid social systems that perpetuate poverty. It is the social relationships between different groups that endure, even when social, political and economic structures change.

And it is a life that finally exhausts Emily, leaves her but a ghost of her former self. It has been said that working class life in England was nasty, brutish and short. In the Tallentire’s household, there is much dignity, only occasional nastiness and little of the brute. But brevity is always a threat.

Attempts to form unions, attempts thus at creating some stability and security, are described with great effect. It would perhaps seem self-evident that poor people with little security would embrace those who promised improvement. But Melvyn Bragg’s portrayal of the process is subtle, and identifies how the workers’ very insecurity can be manipulated to convince them to act against their own interests.

There was one aspect of the book that was less than successful. This was the author’s attempt to write dialogue in local dialect. Spellings are changed to suggest different intonation and words are invented to capture local usage. Too often, however, this got in the way of meaning, thus detracting from the bigger picture. How to deal with accented English always presents a writer with a dilemma. Conveying local flavour is the goal, but this cannot be achieved if the readability of the text is affected. It is, however, a minor point.

The Hired Man, overall, is a novel about change. The workers’ role within that change is insecure throughout. It is not change, itself, that brings about the insecurity, which is the way things are often portrayed. At one point, when the characters consider on whose behalf they are fighting a war, they see clearly that they themselves can never benefit. But neither can they conceive of not fighting. They are hired to do as they are told.

View this book on amazon The Hired Man (Tallentire Trilogy 1)

Posted by philipspires at 10:21 AM