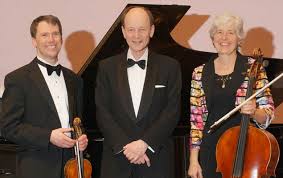 One of the great, even reassuring, things about what the CD shops ignorantly label “Classical Music” is its freedom, its liberality, its democratic principles. Yes, it has its stars. Yes, it has its forms and conventions. But in “Classical Music” these aspects never dominate. The music is always the prime focus. Anyone can learn any piece, anyone can play it, and anyone is free to interpret the composer’s intentions – as long as those intentions are respected, of course. And all of this is done unencumbered by wires, microphones or amplification, since real sound and real experience are always the goal.
Performance, therefore, becomes a form of communication, a presentation of the music, itself, plus often much more. Contrast that with some other genres where commerce and celebrity are the raisons d’être, where the music is merely a secondary, often irrelevant accompaniment. Never mind the quality of the lip-sync, feel the width of the show. Critics of “Classical Music” often cite a lack of bravura on behalf of the performers. This, of course, is to misunderstand both the medium and the content, since the passion is always in the music and good performances should always highlight the music, not themselves.
Not all performers perform well, of course, but then that is true of every staged activity, not least of other genres of music than “Classical”. So when a performer is exceptional both in terms of interpretation and delivery, an occasional flaw or inaccuracy passes by unnoticed. So it was with the Berlin Mendelssohn Trio in Palau Altea, not that there were many flaws to pass by. They offered their audience seven pieces, including an encore, one of which did indeed happen to be “classical” and four of which were presented as a single item, not really because the composer necessarily intended it, but because it made musical sense. The commitment and energy that the group displayed was quite remarkable.
They opened with Beethoven’s Opus 11 trio. If Schubert always sings, then Beethoven usually dances, and this trio hopped and pranced with energy, always, of course, with Beethoven’s musical tension showing through. The trio became a duo for Grieg’s Op36 Cello Sonata, with cellist Ramon Jaffė playing a work to which he is clearly and utterly committed. It’s a well-known sonata but, perhaps, not as well-known as it ought to be, since it is nothing less than a masterpiece. It’s a big, hefty work, which moves from tender to tough, pulsating to pensive, sardonic to sombre and back again throughout its full thirty minutes. To describe Ramon Jaffė’s playing of this hugely demanding piece as both exciting and committed would be stretching under-statement to its limits. But at the end, it seemed that the audience, not the performer, bore the exhaustion, since the cellist’s complete mastery of the piece and his instrument had led everyone up and down every path through the music. Absolute and undiluted magic.
And then the Berlin Mendelssohn Trio actually played a piece of classical music, Haydn’s trio number 45. See Haydn on a concert programme and the mind automatically thinks elegance, wit, proportion – at least when the performers are sufficiently aware of these things, themselves. Too often, I have to admit, one sees Haydn on a programme and thinks “a loosener”. Not so if it’s played third and not so if it’s offered by the Berlin Mendelssohn Trio. Indeed these performers found an edge or two on which to balance, harmonies to stress for surprise and occasional idiosyncratic rhythms to highlight. Quite revelatory.
Their final work was the four seasons, not of Vivaldi, but of Piazzolla. Now I have never before heard these offered as a group in performance and wondered whether their stylistic and melodic similarities might prove repetitive. Not so. The faster tempo parts of these tangos were performed as true allegros, the slower sections as adagios, and so the pieces became, in effect, four twentieth century concerti grossi to emulate their more famous late baroque cousins, though via a tougher, grittier musical language.
And they brought the house down. To say that these three guys were exhausted by this time is no under-statement. Their audience offered an immediate and prolonged standing ovation and the Berlin Mendelssohn Trio responded with a single, sad, gentle encore in the form of Piazzolla’s Oblivion. Prior to this, the pianist actually apologised, saying that that piano provided had really been too small for such a large auditorium. No-one, of course, had noticed, since the group’s music had more than filled the place.
Posted by philipspires at 4:12 PM