It stated the obvious, but I suppose most of these books do. Rule 1: Be creative. Rule 2: There is no rule 2. Rule 3: Same as rule 2. The most enlightening bit was the use of the word “lookist” to describe the fact that a lot of publishers decide what is sellable on the basis of the appearance of the author. So that’s where I am going wrong!

It’s a good read and probably every bit the masterpiece its reputation claims. The problem with satire, however, is that it doesn’t stand alone. Parody, on the other hand, ought to make sense in itself, but obviously more sense if the object of the parody is understood and familiar. Satire only seems to make sense if you know the original.

The section in Lilliput describing the bloke with different sized heels on his shoes, for instance, is very funny, but only when the footnote has provided the context. He is described as having to negotiate a political line between the faction that likes high heels and the other that likes low ones. He makes awkward progress with both groups, since he can barely walk or stand up straight in a pair of shoes made up so he can have a foot in each camp. The reference is beautiful. It refers to High Church and Low Church in the Anglican tradition, and therefore to Whig and Tory, the opposing political parties of the time. To stay sweet with both, certain royals kept a foot in both camps, making their progress as ridiculous as the rough-shod Lilliputian.

In the books three sections, Gulliver is too big, then too small, then everyone is a horse except for the noxious Yahoos, of course. It was still a lot of fun and, probably, hard witting. The trouble, again, was knowing the targets. If today’s Yahoos are considered… perhaps Swift might have googled his yahoos if he had been writing today.

One last observation is about well-known classics in general. The most famous scene from Gulliver’s Travels, at least the one most depicted, is of Gulliver strapped to the ground by Lilliputian string and twine, while the little blighters run all over him. In Don Quixote, an equally quintessential scene is the tilting at windmills, mistaken by the knight for giants. It is interesting that both of these much quoted scenes appear very early in their respective books. I wonder if that might have something to do with certain people never getting very far through them! 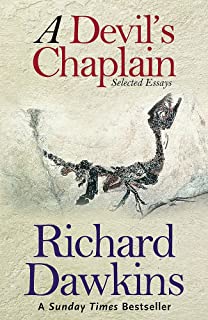 Some excellent essays. A touch too close to being a bit racist here and there, but perhaps that was inaccuracy of language. For the first time I think I actually understand something about evolution. His point about the 98% figure of genetic similarity with chimps was well made. He cited the fact that if you compare two books, there will be a lot of common letters and the figure would suggest similarity. But if you were to compare them sentence by sentence, they would probably share only a tiny fraction of commonality.

What I still don’t understand about theorists on evolution is how they still discuss superiority or desirability for breeding in terms of strength, speed, size etc. After many hundreds of thousands of years during which human cooperation in agriculture, shared civilisation and eventually technological change has transformed the success rate of the species, why are qualities of cooperation, constancy or intellect now not also included in the factors that influence natural selection? Perhaps they are. Maybe I should read late Darwin.

The idea that atheists just go one God further was also a point well made. Many of us would admit to being atheists when it comes to Mithras, Zeus, Thor, etc etc. Of all the Gods, most people who claim not to be atheists probably only admit a belief in one and thus reject thousands of other. It’s a bit like claiming to be a vegetarian on the grounds that you don’t eat duck, but do eat all the rest of the animal world.

The point about cloning and identical twins was made a few too many times, I think, but then it was a collection of essays. It is a point, however, that the non-scientist would find it hard to relate to, since for someone from that starting position the twins are “natural” and the “clone” is not, despite the fact that genetically they represent identical concepts. The position would be really interesting, however, if the twins, or triplets or quads etc arose as a result of in vitro fertilisation and then implantation, and hence were not “natural”.

A story of two co-operatives, Edward Mundy and Sasha. They are cold war people who have also been also urban terror people back of the West German variety. They have complicated lives, but on the face of it no more complicated than most. Eventually they outlive their usefulness as operatives and so are set up as examples. After many years of service to both sides to spite the middle (or perhaps the other way round), they are set up by a CIA-inspired plot to create a political justification for the war on terror, and a political lever to force the position of central European states. The problem with the end of the book is that it was probably written before any of the preceding material was constructed. The problem with the final “setting up” project of the plot is that two hardened intelligence people would have smelled rats, coypus and copious other rodents in any escapade which apparently involved extensive charity of the monetary kind paid straight in to the pocket. In fact Ted takes the trouble to get his Turkish girlfriend and child back to Turkey before the denouement, but in the end it was all too convenient that things turned out that way. Beautifully written and superbly paced, the book was a joy until the polemic emerged.
Posted by philipspires at 4:57 PM

Hi,
just came across your blog, nice one. Good luck for the book, that's a massive and very important project and I hope you will do well.